Mel Robertson's Burford History
Main Menu → Previous Page
Burford Social Life
Pages
IntroductionBurford's First FamiliesBurford FarmingBurford MillsBurford Social OrganizationsBurford Social Life
This page is made up of portions of the series A Bundle of Many Things that was published in the Burford Advance between August 11 and October 20, 1976. To read the full series, click here.

Charivaris or "Shiverees" have always had a popular place in the social history of the township and have been regarded as a pleasant way to welcome a bride and groom back from their honeymoon. However, they have not always had a pleasant connotation. In 1817 Robert Gourlay had this to say about them in his "Statistical Account of Upper Canada", "Chereverring-a singular custom where the match is thought to be unequal or unseasonable as between and old man and a young girl, or within a short period after the death of a former husband or wife. Sometimes it is in consequence of an offense so frequently caused by neglect of invitations to a wedding...Young men disguised in masks assemble at the house of the bride and bridegroom, bearing significant emblems, accompanied by horns, bells and pans with which they perform a discordant serenade...This custom is denounced by people of consideration. It has lately been subject to prosecution...as a riot".

Fortunately, charivaris changed in character over the years but there were still times when they got out of hand such as on April 25th., 1870 in the township. There a charivari developed into an all-night drinking party which overflowed the house and adjourned to a nearby woods. On the morning after one of the celebrants was found unconscious in the woods and dangerously ill with pneumonia (Brantford "Expositor") . On another occasion in the mid-1920's a charivari party which visited a house near the Pioneer cemetery in Burford, was greeted with a couple of shot-gun blasts over their heads.

Auction sales have always had an important place in the social history of a community; symbolizing as they do the movement of families, the break-up of homes following deaths, the dispersal of well-loved family goods and other things that form the very fibre of life. Burford Township has had a number of well-known and excellent auctioneers. Burford's best-known auctioneer was probably R. J. Thomas who was known affectionately as "Bobby". In addition to his auctioneering, Bobby Thomas conducted a number of other successful businesses including the operation of a large garage and a Ford car agency. His best-known enterprize was harness racing and as owner and driver of a number of well-known horses, he was a fixture at most of the fall fairs in Western Ontario. Bob had a keen appreciation for the value of the things he auctioned and it used to be said that if anyone could get the full value for an item "Bobby" could do it.

There are many anecdotes about quick-witted auctioneers and most of them tend to be racey. On one occasion a local auctioneer was trying to get bids on a bunch of phonograph records when a woman stopped the bidding to ask him what were the selections on the record he was holding. The auctioneer, annoyed, replied "It's 'Annie Laurie' on the front side and 'Kiss Me' on the backside". He was not interrupted again. In the days before chamber pots were used for salad dishes, punch bowls and flower pots, auctioneers had a variety of jokes they used in selling them. This so upset the wife of one turn-of-the-century Burford auctioneer that she used to beg her husband not to sell pots and would stay away from sales where he would be selling them. Double beds were always good for jokes with double meanings such as the auctioneer saying to some woman who didn't mind a joke, "For an extra dollar can I talk you into this bed?". People attending sales expected jokes of this nature and no one was offended. Indeed, some auctioneers were so well-known for their wit that people would go to distant sales just to hear them. In the days before TV and radio, the auctioneer replaced the stand-up comic.

Fairs have always had a great impact on the social history of a region and our local agricultural fairs have been no exception. Much has been written about Burford Fair and I will not repeat the details other than to note that the fair was one of the first in Ontario. It was started before 1860 on grounds in West Brantford that are now known as Cockshutt Park. Early photos show an exhibition building and a trotting track. The building has been demolished but the track is still in use as a motor-drive.

In the early 1900's School Fairs were added to the Agricultural Fair scene. These had their beginning in the spring of 1909 when Mr. F. C. Hart, the Agricultural Representative of Waterloo County and his assistant Mr. R. S. Duncan, distributed seeds to the pupils of three rural schools. This was followed by a small school fair in the fall of that year at Riverside school near Galt, where agricultural experts judged entries in public and explained to those attending, the reasons for the awarding of prizes.

In 1911 the school fair experiment was extended to all schools in North Dumfries county and in no time it had spread to all schools in the province. The Government was very enthusiastic about school fairs and supported the movement by supplying 50 x 30 foot tents with 6 foot walls for the exhibits and arranging for Junior Farmer organizations and Women's Institutes to supply judges. These organizations worked under the local Agricultural Representative in each district, who were actually in charge of the fairs.

School Fairs multiplied rapidly until by 1928 five hundred and sixty fairs were held involving 135,153 pupils and 317,371 entries and a total attendance of 362,887 people. The hey-day of School Fairs in Burford Township was undoubtedly during the 1920's and early 1930 when the local Agricultural Representative, Mr. R. Schuyler was in charge. By then the competition had been expanded to include athletic events and a drill competition. This latter event consisted of a marching drill routine, a school yell and a patriotic song and the winning school was awarded a trophy. As I recall, most of the songs were of a highly patriotic and belligerent nature, which, in spite of the nearness of "the War to End all Wars" advised the rest of the world that we were prepared to knock "the living tar" out of any country which looked side-ways at us. One school even rejoiced in a juvenile sergeant-major who bawled Prussian orders to his goose-stepping cohorts.

School Fairs were rotated every year to a different school in the Township with a championship fair for all local fairs at some central point. Prizes were never in money, or goods, but in ribbons which extended down to even sixth place winners. Thus, almost everyone had something to show for his efforts. School fairs were a big event in the schools of fifty years ago and having a special fair of their own meant a great deal to young children. They gave children a sense of accomplishment and a feeling that their parents and other adults, appreciated their efforts. 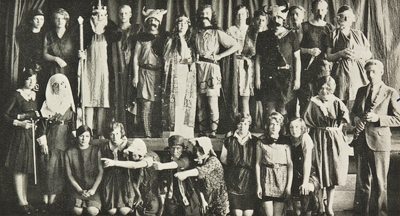 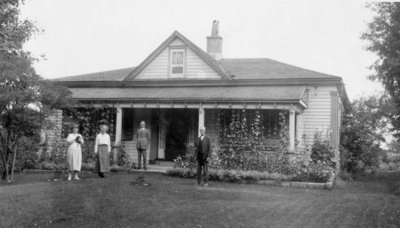 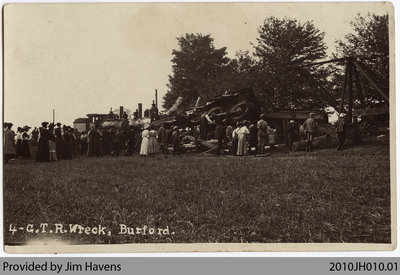 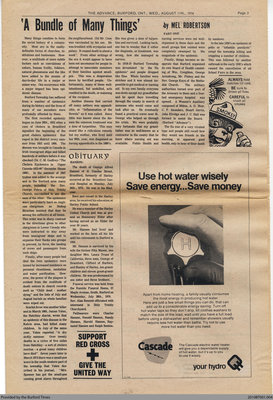