Born in Acol, Kent, September 1919 Douglas was the eldest son of World War One Veteran Albert Hoppé. He joined the Royal Navy in 1939 as a Stoker and left England on an Elders and Fyfe banana boat to join HMS York in Bermuda. He transferred to HMS Ajax when the York returned home in May 1939. Doug served on Ajax for two commissions until 1942, during which time Ajax was involved in the Battle of the River Plate. Following the Plate HMS Ajax was refitted and Doug, along with most of the ship’s company, was drafted to assist in the Dunkirk evacuation where he was stationed on the beach, under fire, helping members of the retreating British Expeditionary Force into boats and to safety. Doug returned to HMS Ajax and took part in the Battle of Mattapan, the evacuations of Greece and Crete, and was on the Malta Convoys for which he received a copy of the George Cross awarded to Malta.

Following his Ajax commissions and a period at engineering college, Doug served out the rest of the war on the aircraft carrier HMS Vengeance in the Pacific. After the war ended he served on HMS Narvic at Christmas Island in the South Pacific for five Hydrogen Bomb tests during 1958/59. He married, had two children and soon completed twenty two years of naval service in 1960 as Chief Mechanic.

After the navy Doug worked for Foster Wheeler boiler makers and helped fit the boilers in such illustrious liners as the Canberra and the Oriana. He eventually became a car body repairer and paint sprayer until his retirement in 1981.

Doug finally lived in Spalding, Lincolnshire where he was a keen amateur radio ham and enjoyed fishing and boating. Doug passed away in July 2007, aged 87, following a protracted illness and a period in a nursing home. Doug’s son Cliff, daughter Linda and grandson Steve all came to Ajax in 2009 to celebrate the 70th anniversary of the Battle of the River Plate. They presented the Town with a matchstick model of HMS Ajax made by Doug and his war diary, both of which are on display at the town hall.
Geographic Coverage
Copyright Statement
Copyright status unknown. Responsibility for determining the copyright status and any use rests exclusively with the user.
Location of Original
Original document and image located in the Ajax Archives.
Contact
Ajax Public Library
Email:libraryinfo@ajaxlibrary.ca
Website:
http://www.ajaxlibrary.ca
Agency street/mail address:
55 Harwood Avenue S.
Ajax, Ontario
L1S 2H8 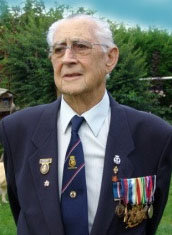