Stanley Dring was born in Lincoln, England in 1919. He was an engineering apprentice and made a name for himself as a boxer and footballer in the city. At the age of 18, he joined the Royal Navy as a Stoker aboard HMS Ajax.

During the Battle of the River Plate on December 13 Stanley manned the ‘after gun’, supplying the shells to the turret. He recalled that one of the guns got so hot that the barrel warped. During the engagement, he lost 3 of his shipmates when the gun turret was destroyed.

In 1940, after leaving the Ajax for a short time, Stanley was involved in the evacuation of Dunkirk making three crossings (two in destroyers and one in a Manx ferry) to evacuate British, French and Polish troops. He returned to HMS Ajax in the same year as she joined the Mediterranean fleet. Engagements with the Italian Navy culminated in the Battle of Mattapan (1941) when many Italian lives were lost.

In May 1941 HMS Ajax was involved in the Evacuation of Crete when 16,000 allied troops were evacuated to Egypt in a number of ships. Stanley recalled that the events in Crete were ‘worse than Dunkirk’. Stanley was one of the crew dispatched in the ship’s liberty boat to evacuate Major-General Bernard Freyberg VC, commander of the Allied forces on Crete. The MajorGeneral thanked him personally for his work once aboard the Ajax.

In 1950, Stanley married his ‘Geordie girl’ Marjorie, after meeting her in a boarding house in South Shields whilst his ship visited the River Tyne for a refit. On leaving the Navy as a Chief Petty Officer, he settled in County Durham working as an engineer in the steel industry. Before his death in March 2005, Stanley was the last surviving member of ‘Mess 41’ on HMS Ajax at the time of the Battle of the River Plate. Having come to the North East of England through the mouth of the River Tyne, he was taken back there where his ashes were returned to the sea he loved. 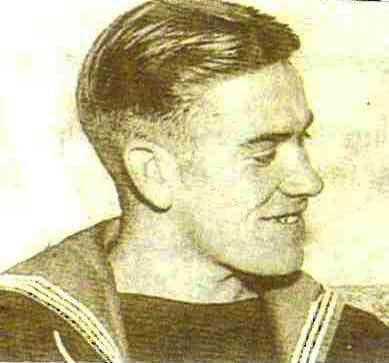