Able Seaman John Davey was a boy entrant into the Royal Navy via HMS Ganges and HMS Ramillies, in 1936/37. He joined HMS Ajax at her re-commissioning at Chatham on January 17, 1938.

‘Jock’ became Ordinary Seaman on May 5, 1938 and served on Ajax during her cruises throughout 1938 and 1939 between Trinidad and Chile, visiting the Rio de la Plata several times in the process as well as the Falkland Islands.

On December 29, 1938 ‘Jock’ was recommended for the job of Air Mechanic by Captain Woodhouse. He had also become Able Seaman at about that time.

He served on the Ajax during the Battle of the River Plate and returned with her to the UK for the victory march in London. He apparently is clearly seen on the ‘Pathe Newsreel’ taken at the time of the march which recorded Ajax’s crew marching down Guildhalll towards the Mansion House in London. His brother Martin notes that he is ‘nearest to the camera-in the front rank, right hand column and is one of the tallest there’. The BBC has shown this film several times throughout the years. Martin says his brother was also featured on a newsreel, shot in Montevideo following the action at the Plate. “Jock, in whites raises a glass to the camera”.

John went missing and was presumed killed during the Dunkirk Evacuation, operation Dynamo on June 2, 1940. He was twenty years old. Martin writes that his brother was “very proud of his country, his ship and his mates. He was a keen all round sportsman, a loving son and a young man of integrity in all things- a nice bloke!”
Geographic Coverage
Copyright Statement
Copyright status unknown. Responsibility for determining the copyright status and any use rests exclusively with the user.
Location of Original
Original document and image located in the Ajax Archives.
Contact
Ajax Public Library
Email:libraryinfo@ajaxlibrary.ca
Website:
http://www.ajaxlibrary.ca
Agency street/mail address:
55 Harwood Avenue S.
Ajax, Ontario
L1S 2H8 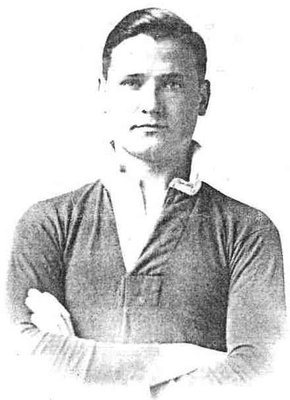