James Henry Clements was born on May 25, 1911 to parents James Clements and Mary Ann Holiday Clements. He lived in West Ham, Essex, England with his parents and four siblings until joining the Royal Marines before the outbreak of World War Two.

James served HMS Ajax during the famous Battle of the River Plate. He and the other Royal Marines were stationed in X and Y Turrets. Some were responsible for loading and firing the guns in the turrets and others were stationed in the ammunition storage areas in the 'bowels' of the ship. These Marines were responsible for loading the 6" shells on to the hydraulic hoist which raised them to the gun turrets where they were loaded and fired.

Unfortunately, one of the 11" shells fired from the Graf Spee hit the Ajax in the area of the X and Y Turrets. It entered through the Commander's Cabin down into the area where the Royal Marines were working, and exploded. Many men were killed and the X and Y Turrets were put out of action. Corporal Clements was one of the Marines who lost his life.

It is also sad to note that when James was killed he was actually not scheduled to be working in the area he was. He had volunteered to take over a shift for a fellow crew member who was ill. 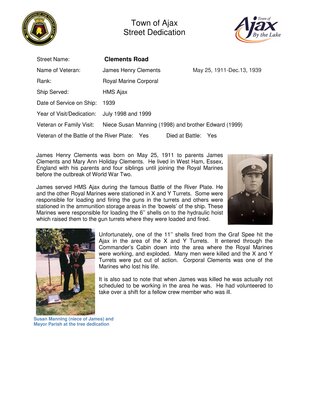