Eric Samuel Drayton was born in Bury Green, Hertfordshire, U.K. on March 22, 1921 to parents William James Drayton and Rose Mary Shortman. He worked as a Land Worker before joining the Royal Navy on May 5, 1941 at the age of twenty.

Eric began his career with the Royal Navy onboard the training ship HMS Pembroke. The first ship he served after training was HMS Cumberland, a County-class, Heavy Cruiser, from September 2, 1941 to August 15, 1943. During that time the Cumberland served off the coast of North Africa and later joined the 1st Cruiser Squadron Home Fleet escorting the Arctic convoys to Russia.

On November 26, 1943 Eric was transferred to HMS Ajax, after she returned from a lengthy refit period. The Ajax later joined the Home Fleet at Scapa Flow before returning to the Mediterranean in February 1944. Among other tasks, the Ajax helped suppress a mutiny on a Greek cruiser, bombarded Rhodes to provide cover, and participated in active engagement against the Italian fleet. In May, HMS Ajax was deployed back to the UK to provide assistance to the Allied troops in Normandy. On June 6, D-Day, she provided naval gunfire support during the assault phase, and was the first ship to open fire.

Eric had married Lillian Sanderson on December 11, 1943 in Durham and together they had two daughters.

When Eric was ninety three he received the Ushakov Medal from the Russian ambassador to Britain. This medal was awarded to those involved in the Second World War’s Arctic Convoys and was presented at a ceremony on the grounds of Kensington Palace on August 19, 2014. Eric remembered his harrowing time in the Arctic as being, “sitting targets for the aircraft and the U-boats”. Between August 1941 and the end of the war, seventy eight convoys made the journey to, and from, northern Russia, carrying four million tons of supplies for Soviet forces fighting the Germans on the Eastern Front.

Eric was also awarded the Arctic Star and was in line to receive the Legion D’honneur from the French government for the action at Gold Beach on D-Day. After the War, Eric enrolled in the Royal Fleet Reserve, a branch created to support the Royal Navy until July 1, 1953.

Eric Samuel Drayton died on June 6, 2015 at the age of ninety four. 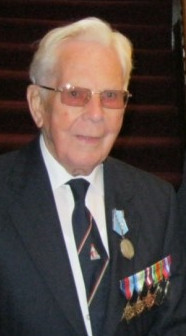