David Keith Lear was born in Bristol, U.K. on January 8, 1959 to parents Keith and Sue Lear. He lived with his parents and his sister Sharon until joining the Royal Navy on July 8, 1975 at the age of sixteen. He immediately began training as a Naval Rating at HMS Ganges. From there it was on to HMS Seahawk to complete his Aircraft Handling technical training and upon completion of that, he was posted to HMS Heron carrying out general duties. On August 5, 1976 he was drafted to HMS Ajax as an Aircraft Handler.

It was shortly after joining the Ajax that she sailed for Canada, which was David’s first ever trip abroad. He was aware of the history of the Town, and the significance of the Battle of the River Plate, so was greatly looking forward to the visit. He has never forgotten the warm welcome that the ship’s company received from the citizens of Ajax and the surrounding area and still has various memorabilia given to him by the townsfolk.
David stayed with HMS Ajax until October 24, 1977 when he was posted back to HMS Heron. While there he was involved in firefighting duties due to the Firefighters national strike. From there it was on to HMS Seahawk to complete an HGV (Heavy Goods Vehicle) course, and on completion carried out Fire Crash Duties back at HMS Heron.
In the early 1980s David was drafted to 846 Naval Air Squadron with various deployments on board HMS Bulwark until the middle of 1981 when he left the Royal Navy and returned to Bristol. David worked for a Health Food supplier until 1985 when he began his dream job as an Airfield Firefighter at British Aerospace Filton, Bristol. By 1989 David was promoted to Leading Firefighter and worked his way up through the ranks to Senior Airfield Fire Officer. In 2006 he became a member of the Airport Fire Officers Association. In 2012 he was presented with the Top Aerodrome Award from the International Fire Training Centre.

In May 2017 David decided to take an early retirement and is now looking forward to travelling with his partner Lynne and spending time with his children Shaun and Hayley and grandchildren Madison and Arthur.

Regardless of where David worked, he always had a great fondness for HMS Ajax, and in 2017 became a member of the HMS Ajax and River Plate Veterans Association. In 2019 he went to South America to commemorate the 80th Anniversary of the Battle of the River Plate with the association and acted as one of the Association Standard Bearer’s. 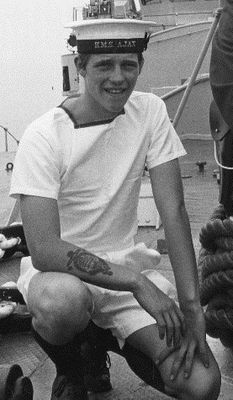