David Cooper was born in Paisley Scotland on February 16, 1957. He lived with his family in Glasgow until he joined the Royal Navy on February 6, 1973, at the age of fifteen. His career began with HMS Raleigh and then on to HMS Cambridge Gunnery School. By July of that year he joined his first ship, the Frigate Scylla and then moved to the training ship Flintham before joining HMS Ajax in May 1976.

David remembers the build up to the visit of the Town of Ajax very well. He was sent off the ship with two other sailors to meet the ship each time it entered a lock. It was their job to secure the vessel once it entered each lock before getting into Lake Ontario. He was also part of the Guard of Honour during the visit and fondly remembers the joy of the people of Ajax as the Guard paraded through the town during the Freedom of the Town. David says that the hospitality during the visit was out of this world and it was never equaled during all of his time in the Royal Navy.

David went on to complete thirty two years in the Royal Navy, serving on the frigates; Phoebe, Hermione, Brazen and HMS Norfolk. He was also part of the United Nations in Cambodia in 1991 and worked alongside members from the Canadian Navy as Peacekeepers. His final position in the Royal Navy was as the Ceremonial Training Officer at Dartmouth Royal Naval College.

David then spent five years in the Middle East at a leadership academy in Qatar as a Senior Instructor and then Head of the Leadership Department. His final job prior to his retirement was as an Environmental Officer for the Cruise Line Company Holland America. On one cruise he met a guest from the Town of Ajax who visited the ship during its visit in 1976, it’s a small world.

David is married to Debra and they celebrated their 40th wedding anniversary in 2020. 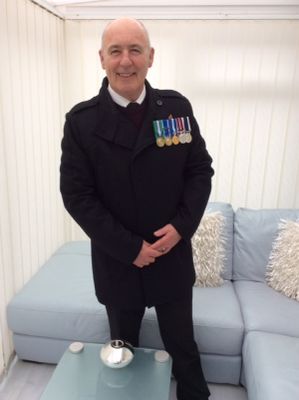