Reginald David Adams was born on May 23, 1909 in Plymouth, Devon, United Kingdom. He joined the Royal Navy in 1924 at fifteen years of age, and went on to serve many ships during his lengthy career.

Reginald joined HMS Ajax on January 11, 1938 before the outbreak of World War Two. While at the famous Battle of the River Plate Reginald was a Gunner. He continued serving the Ajax until March 1941 when he was reassigned.

At the end of World War Two Reginald spent time at HMS Beehive, a coastal forces base, and HMS Plymouth, a shore training establishment. He continued his career with the Royal Navy after the War and was ‘pensioned out’ in May of 1949 after twenty five years of service. 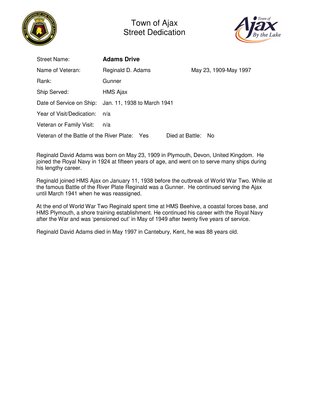