Norman Stevens was born on March 25, 1922 to Edward and Agnes Ann Stevens of Haslingden, Lancashire in the United Kingdom. He also had one brother, John.

Norman worked as a Letterpress printer until enlisting with the Royal Marines on May 14, 1941 at the age of nineteen. He was a part of the H.O. 94 Squad which was formed a few days later, on May 19, 1941.

Norman married Doris Holleran at St. Pauls’ Church in Ramsbottom, Lancashire in April 1947 and together they had two sons, Bob (Robert) in 1948 and Jeff in 1951.

After his WW2 Royal Marine service on HMS Shropshire and HMS Ajax, Norman returned to civilian life and re-joined the Haslingden Printing Works, as a foreman printer. 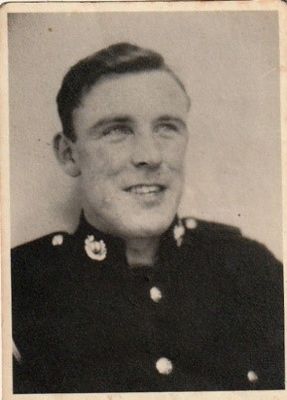