Charles Edward Beck was born in October 1910, the eldest son of Charles and Annie Beck of Belper, Derbyshire, U.K. The family later welcomed three more sons; John, James and Richard. Charles was educated at St. Helen’s Street School, Chesterfield, and Wirksworth Grammar School, and was for over four years a privileged apprentice at the L.M.S. Works in Derby.

Charles joined the Royal Navy in July 1933 and began his career onboard the destroyer Duchess. He was with HMS Brilliant during the trouble in Palestine, the Italian conquest of Abyssinia and the Spanish Civil War.

Charles returned to England in 1936 and was stationed at Chatham. During this time he passed his examination for transfer from stoker to engineer, and in February, 1938, he was posted to the Ajax. The ship was on patrol during the Jamaican Riots, and after cruising around the American coast, the ship made haste for Chile, where the crew took part in rescuing the victims of an earthquake. HMS Ajax was in Rio harbour the day that war was declared. Of the Battle of the River Plate, Charles wrote to his mother, “we turned out that morning to find we had met the Graf Spee. Of the battle or the ship I saw nothing, but the ‘racket’ was bad enough”.

When he lived at Matlock, Charles was chairman of the local branch of the Junior Imperial League and he took an active part in the work of the League’s Belper branch. 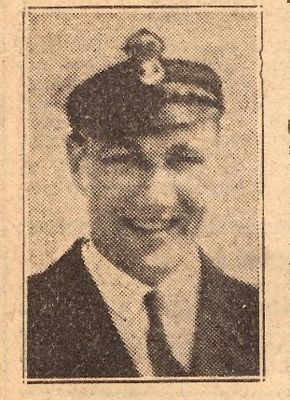