The first name that the shell-filling plant had was "Dilco" because of the fact that the Canadian National Railroad which was adjacent to the plant put a sign at the sighting, "Defence Industries Limited" which is abbriviated by D.I.L. company and later it was changed to Pickering Works by Canadian Industries Limited (the head office) under the heading of Defence Industries Limited. I believe that contest was held sometime in 1942 or just after the naval battle just off South America when the Graf Spee was sunk by the British ships. It was in the contest the name of the Ajax, one of the ships that was in that particular battle was suggested by a member of my own staff a Mr. Frank Holroyd who was in the art department. Frank Holroyd was actually the man who named the town of Ajax. The contest was conducted through the Commando. It was printed in the Commando that the contest was open to any member of the staff at the plant, then Pickering Works, to suggest a suitable name for the particular community surrounding Pickering Works. The judge was the Works manager E.E. Daggett, and he had the final say in giving the town its name. 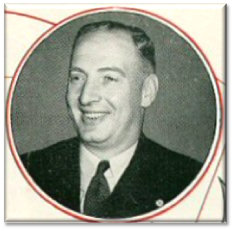