Creator
Fluvian Studio, Photographer
Media Type
Image
Item Type
Negatives
Description
Dr. Saint-Firmin Monestime was born in Port-au-Prince, Haiti in 1909 where he went to school and worked as a doctor specializing in rural medicine. Dr. Monestime was awarded the Haitian Legion of Merit for his work during the Parsley Massacre which saw the slaying of hundreds of thousands of Haitians under the orders of the Dominican president Rafael Trujillo. In 1940, Dr. Monestime immigrated to Quebec City where he worked hard to learn English, be recertified as a doctor and become a Canadian citizen. Dr. Monestime sought to open his own practice in Timmins in 1951 and while en route he stopped in Mattawa for lunch. As luck would have it, the owner of the restaurant, Chez Francois Restaurant, was a former patient. This former patient convinced Dr. Monestime to stay in Mattawa to be the area doctor, a post recently vacated. He agreed and eventually became a pillar of the community. In 1962 Dr. Monestime was elected to the municipal council and in 1963 he was elected mayor. He took the following year off for medical reasons but was elected again in 1965 and remained mayor until his death in 1977. Dr. Monestime was the first black mayor elected in Canadian history. He and his wife, Zena Petschersky, also established a nursing home in Mattawa and had four children.
Dimensions
Width: 2.25 in
Height: 3.25 in 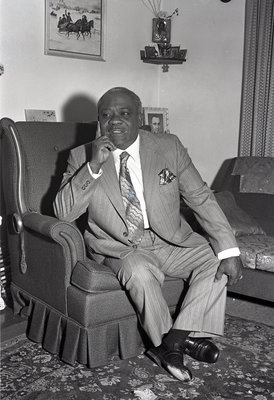