Media Type
Image
Item Type
Envelopes
Description
Settlers moved into the area of today's Bronte Road up to "the Dundas highway" in 1806. In 1808, William Case of the Ancaster Circuit of the Methodist Episcopal Church, began preaching in Palermo homes and in 1812, the first Methodist meetings started at Lawrence Hagar's home in Palermo.

Land was purchased in 1818 for a cemetery with space for a meeting house and schoolhouse should they be required. The Palermo Chapel was built in 1824. The town was named Palermo and the post office was established in 1835.

Divisions within the church during the 1830's resulted in an 1836 court case over property. The result was that the existing property was owned by the Wesleyan Methodists. This lead to the Episcopalian Methodists erecting their own chapel on the other side of the Palermo Cemetery. Reverend John Reynolds was elected and consecrated to the Office of Bishop on June 27, 1835 in the chapel.

They later built the present sanctuary of Palermo United Church on the north-east corner of the now Old Bronte Road-Dundas Street West intersection (land records show 54x110 feet was given to the church in 1871 by Lucinda & Ezra Winchell and 1/2 acre given by William Laidlaw and his wife in 1875).

In 1925, this Methodist congregation voted to join the United Church of Canada.

According to the Town of Oakville Heritage Planning Division report "Palermo Village, Oakville: A Heritage Resources Review and Strategy" of November 2008, the "Gothic Revival" style parsonage that Reverend Cohoe used was built in 1880.

Prior to serving in Palermo, Rev. Cohoe was minister in Freelton, Wentworth County. The March 1892 Journal of the House of Commons (Canada) names him as the Freelton Methodist Church petitioner (along with a number of other Church representatives) to have the Canadian section of the Chicago Columbian Exposition to close on the Lord's Day.

In 1872, he was one of several petitioning the Ontario Legislative Assembly praying that an Act may pass to prohibit the manufacture and sale of Intoxicating Liquors.

1897 saw him in Springford, Norwich District, Ontario, of the Methodist Church.

The Nelson Women's Tweedsmuir History lists the ministers who served the church from 1867 to 1964 on page 59. A copy of the list is in the print archives of the TTHS along with the John Shearman publication on the Church published in 1982, "The First Thirty Years 1808-1838" which mentions many of the earliest circuit riders, and a third list of the early ministers from 1812-1992.

A link to the Tweedsmuir History page 59 is linked on the right for your further reference.

Notes
The manse property deeded in 1875 is presently designated 3017 Bronte Road. The deed reads "along the east limit of the allowance for road between lots 30 and 31". According to John Shearman, (UCCAN ret.), this means the property actually fronted on Bronte Road.

Mr. Shearman further indicates it was likely sold when the Palermo church was linked with Walton Memorial Church in Bronte and the parsonage located in Bronte about the turn of the 20th century. A portion of the old manse property was repurchased around 2000 to permit entrance to the parking lot from Old Bronte Road.

The present manse stands at 2317 Dundas Street.
Inscriptions
If not called for in 10 days, RETURN TO REV. B. L. COHOE, Methodist Parsonage, PALERMO, - - ONTARIO, CANADA. 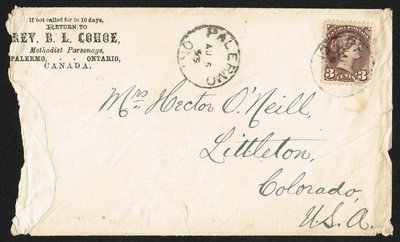