Media Type
Text
Item Type
Manifests
Description
War loss claims were initially made during or just after the war. As there were different commissions for losses to the British, the Americans, and Indians aiding both armies, a claimant may have made two or more separate claims. These claims were usually filed together but there was also a register of certificates supporting claims and pages were sometimes misfiled in other people’s claims.

There were insufficient funds available to pay the claims after the war and claims had to be resubmitted in 1823. Claims were rejected for a number of reasons, including fraud and lack of evidence. Agents were sometimes hired to appeal rejections or to facilitate the claim process. Carpenters, and other tradesmen, and merchants sometimes, certified the value of lost items. Because of the delays in recompense some families were left destitute for over ten years after their loss.

The ideal war loss claim included details for who, what, when, where, why, and how the loss occurred. However many claims lacked some these details. In other cases documents were illegible or difficult to read. The claim registers in the collection are incomplete and contain a number of transcription errors. An effort has been made to correct those errors in these indices.

Even when documents were legible, determining who made the claim was not always easy because names were spelt phonetically and it was not unusual to find two or more different spellings for a surname on the same page. The first name for each claim below was usually the claimant. The claimant may also have been a widow, an heir, or an agent for the deceased’s estate. Additional names in these indices were generally witnesses to the loss or related events. The names of character references for the claimant and appraisers for the value of the loss have not been regularly included.

Most claims also indicated who was responsible for causing the loss. The more detailed claims may even record the name, rank, and regiment of the person involved. There was limited space in the indices below and I have only indicated whether it was the fault of the allies or the enemy. Losses to Indians aiding either side were not indicated in these indices.

Some claims lacked a detailed list of what was lost while others gave itemized lists of the contents of a stolen trunk or burnt house.

Rather than an exact date for a loss, there may have been no date given, just the year, or just the month or season in a particular year. This information is included in some of the indices below but where there were multiple losses on different dates only the years may have been recorded.

Why and how a loss occurred would have helped the commissioners determine the validity of the claim but this information was sometimes lacking as well. A number of interesting stories were reported by witnesses to some of the events. Some claims were rejected because of a lack of details or certified proof of the loss or event.

For more information by Fred Blair, view his website: War of 1812 Canadian Stories. Fred carefully researches, writes and posts insightful short stories about life in Upper Canada during the War of 1812, how to find primary and secondary source information about the war, indices to primary document collections, and Upper Canada Militia transcripts. Copyright by Fred Blair, 2015-to date. Enquiries welcome at warof1812cdnstories@gmail.com A link to his site is included in this record for your further information.
Notes
You can view and download the entire document to your own computer by clicking on the "Original.pdf" icon below the image of the first page here in this record. You can also view each of the 155 pages individually by clicking on "Pages" "Select" and each page number.
Subject(s)
War of 1812
Upper Canada Militia
Local identifier
TTFBWar000658
Collection
Trafalgar Township Historical Society
Copyright Statement
Copyright status unknown. Responsibility for determining the copyright status and any use rests exclusively with the user.
Recommended Citation
War of 1812, Upper Canada War Loss Claims Numerical Index Compiled by Fred Blair, Published January 28, 2017
Contact
Trafalgar Township Historical Society
Email:michelle@tths.ca
Website:
http://www.tths.ca 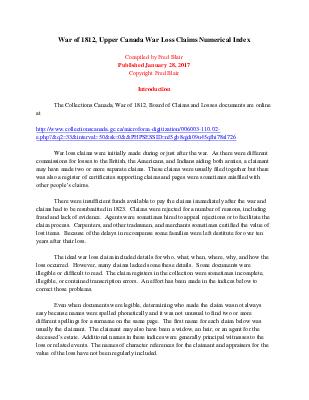