Media Type
Text
Item Type
Manifests
Description
On Oct. 13, 1812, the Coloured Company was among the last group to leave Fort George for Queenston (V pg. 179). The corps fought at Queenston Heights and was commanded by Captain Robert Runchey as part of the 1st Regiment of Lincoln Militia. The some of the sergeants and all of lower ranks were Coloured. Sgt. William Thompson and thirteen other men were transferred from the 3rd York (MC pg. 61)(NAH). The thirty-eight men of Coloured Company were on the western flank of General Sheaffe’s force on the Heights (V pg. 186, 274). Captain Runchey was absent from the Battle of Queenston Heights and resigned his commission after the battle (Run).

In 1813, the Corps helped defend Fort George and Newark from the American Landing at 2 Mile Creek (NAH).

On May 27, 1813, the Coloured Company was among the companies who tried to oppose the American landing at Captain James Crooks’ farm (SF pg. 19).

On May 29th, there were thirty officers and men in Runchey’s Corps of Artificers which were part Brigadier General Vincent’s retreating army (SF pg. 52).

A June 3, 1813 statement of Troops in cantonments at the head of Burlington Bay reported the Corps consisted of one captain, three sergeants, twenty-nine rank and file fit for duty and one sick (NAH).

On June 4, 1813, after the Battle of Stoney Creek, Runchey’s artificers were retained while most of the militia was sent home (SF pg. 70).

On June 13, 1813, the week after the Battle of Stoney Creek the Corps mustered two sergeants and twenty-seven rank and file (NAH).

During the blockade of Fort George, the unit was at St. David’s on Aug. 22nd with twenty-six rank and file (NAH).

On July 8, 1814, a distribution return for Fort Mississauga recorded that the Coloured Corps stationed there included one officer, two sergeants, one drummer, and twenty-two rank and file with four sick (DH1 pg. 51)(NAH). When General Riall retired to Twenty Mile Creek the Corps remained at the fort (NAH).

After the war, some of the men settled in Oro and Sunnidale Townships in Simcoe Co. Others received land grants but did not settle on them (MC pg. 59, 60).

Only one Coloured Corps payroll document has been found (CC2).

For more information by Fred Blair, view his website: War of 1812 Canadian Stories. Fred carefully researches, writes and posts insightful short stories about life in Upper Canada during the War of 1812, how to find primary and secondary source information about the war, indices to primary document collections, and Upper Canada Militia transcripts. Copyright by Fred Blair, 2015-to date. Enquiries welcome at warof1812cdnstories@gmail.com A link to his site is included in this record for your further information.
Notes
You can view and download the entire document to your own computer by clicking on the "Original.pdf" icon below the image of the first page here in this record. You can also view each of the 13 pages individually by clicking on "Pages" "Select" and each page number.
Subject(s)
War of 1812
Upper Canada Militia
Local identifier
TTFBWar000657
Collection
Trafalgar Township Historical Society
Copyright Statement
Copyright status unknown. Responsibility for determining the copyright status and any use rests exclusively with the user.
Recommended Citation
The Coloured Corps and Corps of Artificers History and Muster Roll At the Time of the War of 1812 Compiled by Fred Blair. Transcribed and Indexed by Fred Blair, 2nd Edition Published February 9, 2017
Contact
Trafalgar Township Historical Society
Email:michelle@tths.ca
Website:
http://www.tths.ca 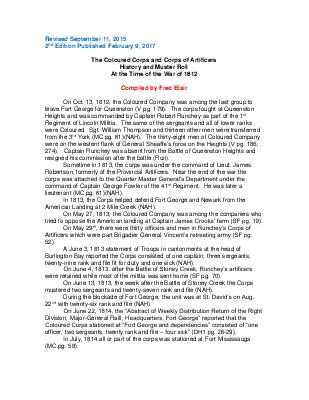