Media Type
Image
Text
Item Type
Photographs
Description
One of several photographs in our digital collection of the Township of Trafalgar Police Boys Band, this one taken in sometime in the years 1958 - 1965. This particular photograph shows the band's majorettes, teen Barb Priestly and (Grace) Elizabeth Wilson. Other pictures show a second teenage majorette, Jean Crutcher.

Elizabeth's brothers played instruments in the band, Her father, Harry, was one of the two police band leaders, the other being John Robson. Another Trafalgar policeman, George Stalkfish also helped to teach how to play the instruments.

Briefly, in 1948 Fred Oliver was selected from 110 applicants and appointed the Police Chief of Trafalgar Township. Along with his police duties, he was also the truant officer, dog catcher and building inspector for the Township of Trafalgar.

Fred policed from Lake Ontario on the south to Hornby, Ontario on the north and to Burloak Drive, as we know it now, on the west. His area included the Village of Bronte and excluded the Town of Oakville. Oakville was south of the Queen Elizabeth Way at that time and did not include the Ford plant. The population of this area was approximately 5,500. Fred worked alone out of his residence until 1952 when he hired a second officer, Harry Wilson.
Notes
Milton's July 5, 1956 Canadian Champion newspaper had a photograph of majorettes Elizabeth and Jean. They are shown standing on either side of the Pipe Major of Kitchener's 54th L.A.A. Scots Fusiliers. The newspaper page is linked here for your further information (use your mouse to move the page image over to Column 4, top of the page). It gives us more information about this marching band: the photograph was taken at a massed band Tattoo in Acton. the band was formed "recently", and the name of the band was given as "Trafalgar Police Boys and Girls Band". 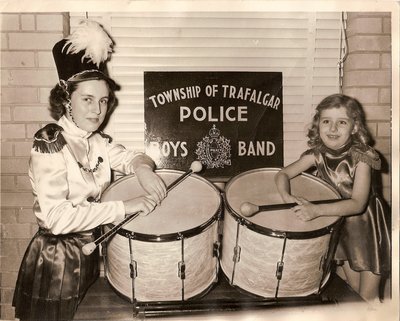