I was born Rosa Hellmuth in Nuremberg, Germany in 1927. I had eleven years of formal education there.

At the end of my schooling WW2 was in progress and I had three choices for work. They were:

a) in an ammunition factory,

b) household helper for a woman factory whose husband was away serving in the army,

c) in a laundry where army clothing was cleaned.

I chose the laundry, working as a finisher ironer and stayed there until I left for Canada (19 years).

I met Endel Ojavee at a Coffee House. He had been injured while serving on the Eastern Front and was recuperating in Nuremberg. He wasn't allowed to return to his home in Estonia. We married and shortly after he decided we should emigrate. He had three choices:

b) Australia - too far away

He came first (I couldn't come until he had a home and a job) not knowing where he would go or what he would do to earn a living. For 3 weeks he was billeted in a camp at Ajax. A company representative came there looking for

We both made the trip to Canada by sea. That was the most beautiful trip of my life - warm July weather and calm waters.

I disembarked in Montreal. With the help of a language translation book I was able to ask, "What's the shortest way to Port Arthur?" As the train rolled westward I recall thinking of Oba (a place in the wilderness). "What have I gotten into? Bush and water, bush and water." I was so glad to see the small city of Port Arthur.

Endel was temporarily unemployed so he was able to meet me and take me to my new home. It was one room with a bed, a small sofa, a table, 2 chairs, and a hot plate - for three of us. Liz was then 5 years old.

It took me six weeks to get a job as a dishwasher at the General Hospital. We stayed there from 1952 to 1957.

A friend told Endel that K-Clark was hiring workers for the woodyard. He got a job and we moved to Schreiber and then in 1961 to Terrace Bay. Shortly after 60 people were laid off including Endel. Fortunately, a janitor was needed at the Public

School which Endel obtained. Later I worked as a cook for 15 years at Birchwood Terrace Home for the Aged.

We built our house in Terrace Bay and generally life here has been good to me.

Now I'm leaving Terrace Bay, Sept. 2011, to spend the rest of my retirement with daughter Liz, broken by visits to the sons. 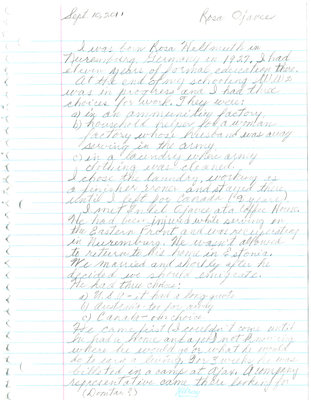