THESSALON - Tuesday's tea for the Thessalon Red Cross Hospital marks the last for the Red Cross in Thessalon and makes another mark in the history of hospital service in Thessalon.

During the next several months the hospital will be taken over by Sault Ste. Marie's Plummer Memorial Hospital. The only other major change beside the name will be that the head administration will be in the Sault rather than at Red Cross headquarters in Toronto.

The first known hospital in Thessalon was apparently the old castle, now torn down, but at one time situated on "Castle Rock" at the east end of Huron Street.

The castle was built in 1886 by Robert McEwen.

Some of Thessalon's senior residents recall that it was originally built for use as a tuberculosis sanitarium. However it became used as a general hospital as well.

This was probably somewhere around 1896 as old newspaper clippings claim that the first hospital was built at that time.

Sometime in the early 1900's a house was bought at the present hospital site and with an addition built on, this became the Victorian Hospital.

A 1903 Algoma Advocate, Thessalon's newspaper at the time, had an ad for the hospital with public wards costing $4 per week and private wards $7 per week. The maternity ward cost $10 per week and the operating room charged $1.50 to $3.00. Out nursing was listed at $1 per day and $1.50 per night.

It was in 1924 that the Red Cross took over operation of the 14 bed hospital. Senior citizens recall Doctors McCort, Baxter, Walker,Cameron, Spence, Taylor, Wallace, Sproule, Grigg, Snider and West.

On April 2, 1940 fire broke out in the hospital. Several patients were removed from the building including nine newborn babies. Estimated damage was more than $15,000. Some of the beds and equipment were salvaged although the building was destroyed.

The newly built hospital was opened on March 13. 1942 with official opening ceremonies on May 12 of that year. The new building was much needed and proved to be a benefit to the town.

However, renovations became a necessity as with all buildings, and they began in 1967 at a total cost of $225.000. Town people, local businesses and industries donated a large sum of money for the project.

Today, the hospital is almost always filled to capacity and handles many emergency cases until they can be moved to larger centres such as Sault Ste. Marie.

With the change of hands, hospital care in Thessalon will continue as it has in the past, although the end of another era has been reached.

Pauline Valiquette
Creator
Pauline Valiquette, Author
Media Type
Text
Image
Item Type
Clippings
Description
This is a newspaper article about the history of the local hospital. The hospital is about to change from a Red Cross Hospital to the Thessalon Hospital, and be administered by Plummer Memorial Hospital of Sault Ste. Marie.

There are two photos, one of the Red Cross hospital before it burned down and another of the first hospital at the Old Castle accompany the article. 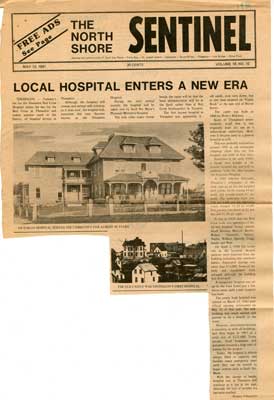