THESSALON — There are still several old-timers throughout the district who recall the days of the old Dyment Mill at Thessalon.

The date of the establishment of the mill is a matter of controversy, some giving the date as 1873 others 1876.

According to a history of the Algoma district compiled by a historian for the department of agriculture "Nathaniel Dyment, founder of the Town of Thessalon, established his mill here in 1877." It was located at the far end (south) of what is now Main Street.

Mr. Dyment came to Thessalon from Barrie where he maintained a mill and lumber yard. Recognizing the future possibilities of the region's vast forested areas, he had chosen a good site for his operations. Lumber could be loaded on vessels at the lake-shore and shipped to his lumber yards in Kincardine. Most of the lumber, it was said was shipped in his own schooner.

The noted lumberman purchased 300 acres on the east side and at the mouth of the Thessalon River from the department of Indian affairs. This was for a mill and townsite. Later he bought the Township of Kirkwood timber rights from the McArthur Brothers, who were square timber operators.

The west bank of the Thessalon River and Thessalon Point were still Indian land in those early days. It is interesting to note that the name Thessalon is reported to be an English corruption of the Ojibway word "Tesalon" — meaning "long point".

In his memoirs, the late J. B. Dobie, who came to Thessalon in 1880 to start his business as a general merchant, we find: "Nathaniel Dyment had a sawmill operation then. Settlers were coming in rapidly from different parts of Ontario and settling in the fertile valleys along the North shore of Lake Huron from the Sault to Blind River — especially in the vicinities of Bruce Mines and Thessalon.

There were a few small cottages around the saw mill which stood at the east end of the rock at the foot of Main Street.

Mr. Dobie in another article states, "In 1875 Dyment and May came from Barrie to organize the milling industry at Thessalon. The woods foreman at the time was a John Cameron. — First winter of operations was around Livingstone Creek. A big cut of very large pine was towed from there to Thessalon by a little tug. Men came from Penetang, Barrie and Collingwood.

He went on to speak of immense pine logs from Kirkwood which were floated over the dam at Little Rapids. "Dyment's Store and warehouse stood right on the lakeshore then. George Dodds was the bookkeeper for Dyment. Dave Gordon Sr. was a foreman for many years and many stories can be told of those days."

One of the most often quoted stories was the fact that Mr. Gordon cut pine logs skidded and drove them to the mill where they were cut into lumber and (when dry) loaded on the vessel for $5.50 per thousand.

His son, Sam Gordon of Little Rapids, recalls that running wages in the camps at that time were $14 per month and board. The late James F. Shaw of the Sault worked for Dyment for the princely wage of $1 per day — the day being from 6 a.m. to 6 p.m.

"Circular saws were used and 40.000 board feet of lumber were turned out per day. This was piled in the yard to dry — for green lumber was not sold in those days," he said. He recalled logs cut in Rose Township which were six feet in diameter. "The logs cut were the very best."

By 1884 there were about 200 permanent residents in Thessalon which boasted 18 houses, eight shacks, a general store, a hotel, two churches and a one-room school. Mail came by boat during the summer and by dog team in the winter. Although the Sault extension of the CPR was built in 1887, most of the commerce was carried by water. About 14 boats docked at Thessalon per week during the navigation period.

The year 1888 was almost disastrous because of forest fires. A very bad fire started in The Desert (probably Kirkwood) and burned furiously. At other points fire threatened the new railway.

The Dyment sawmill was destroyed that September by fire starting in the boiler room. Mr. Dyment immediately ordered the erection of a new and larger mill — and it was almost completed that fall.

Dyments operated their business for over 20 years with many of the old standbys working year after year. They sold out in 1906 to Thessalon Lumber Company. A year later the mill was dismantled and moved to Nesterville where it was rebuilt.

Creator
Edith Cameron, Author
Media Type
Text
Image
Item Type
Clippings
Notes
This is a newspaper clipping about some local "oldtimers" recalling their memories of the Nathanial Dyment and his lumber Mill in the Thessalon area in the late 1800s to early 1900s.

A photo of mill workers standing in front of the mill circa 1900 is located above the written article. 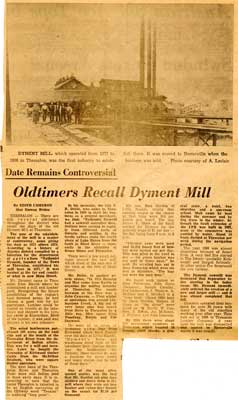