IRON BRIDGE — Back in Patton Township, a few miles out of the village of Iron Bridge, there is a little bit of Scotland.

It involves a pioneer farm, once owned by the late Mr. and Mrs, Alec Fraser, and which was lately vacated by their daughter and son-in-law, Mr. and Mrs. Neil Draper, now living in the village.

When Alec Fraser established a post office in Patton in 1900, the name "Skibo" was chosen from among several submitted by him.

Mr. Fraser came originally from northern Scotland where his family farmed on the Andrew Carnegie Estate, which was the' site of the well-known Skibo Castle. Sandy, as he was known in the Land of the Heather, and his brother John came to Canada to try their luck. John went to Fort William and Sandy to Toronto where he began working for the Shedden Company and later for the CPR in the Lake Superior area.

When the branch line to Sault Ste. Marie was started, Alec Fraser decided to buy some property in the Dean Lake area. So it was that he took up 320 acres in Patton Township in 1882. He continued working for the CPR, Moving a Mr. Rennie to work on the property. Mr. Fraser at that time was engaged in looking for timber for bridges and railroad ties.

The Patton property was chosen on- account of its good timber and splendid land and because there was an abundance of water there. Two years after the log shanty was built in 1882. it burned. In the meantime, Several acres of land had been cleared and trails cut. That fall, Mr. Fraser began building a log house, which later, with a further addition, became the Fraser homestead.

On Oct. 11, 1893, Alec Fraser and Elizabeth Rebecca Carlyle of Iron Bridge (then referred to as Tally-ho) were wed and went to the farm to live.

In the early days oxen had been used but Alec decided that he would make a trip to Owen Sound and bring back some horses.

Implements were bought as well as a cart and wagon and it wasn't long until farming was begun in earnest. Logs, ties and firewood were cut in the winter, more land was chopped out during the summer, crops were sown and pigs, cattle, sheep and poultry became a part of the farm scene. The crops were harvested in those days by scythe and cradle. When 25 acres had been cleared and no stumps were in evidence, a mower with a four-foot cut was bought from David Tait of St. Joe's Island.

From then on, newer methods of farming came into use. In 1910, there was a barn raising and the old log barn was then replaced.

Mrs. Draper recalls that occasion. "The barn was framed by the late William James Boville. The day of the raising, long tables were set up in the yard, laden with food and a large crowd came," she related.

"We attended the log school, which was also used as a church and therefore the community centre. There were around 15 families living in Patton then. We used to hold picnics in the groves and in the winter enjoyed skating on Alma Lake. There were concerts and socials and football was a game everybody played," Mrs. Draper said.

Produce from the farm, including butter, eggs and poultry, was sold in Blind River, a distance of 18 miles — a full day's trip in the horse 'n buggy days. The butter stood the trip well, for it was packed in a box containing ice from the ice-house and was covered with rhubarb leaves to keep it cool.

Mr. Fraser died in June 1932. Neil Draper and Katie were married on Aug. 31 — "the day of the eclipse of the sun" as Neil recalls — and the couple began their career on the pioneer farm.

Since that time this well-known farm has expanded to 1,000 acres.

The original home with its logs covered by handmade shingles, was replaced by a spacious modern home in 1948. The Drapers have carried on a successful farming enterprise down through the years. .

Fifteen years ago, they built a house in Iron Bridge, the first one in the Warnock Subdivision. which has been kept occupied. At the first of this month, after selling the farm, the Drapers moved in.

The farm is now owned by Dr. George Dean of Birmingham, Mich. The doctor bought the stock and implements and the farm is being taken care of by Ernie Dougherty.

Mrs. Draper, who has been a school bus driver for the past It- years, has one year to go on her contract of bringing seven children from Patton to the local school. Mr. Draper who has been a trustee for almost 38 years, is a member of the North Shore School Board.

Both will miss the farm but will have time for their hobbies which include photography, with scenes in this area as favorite subjects.

Photo Caption: FRASER HOMESTEAD — This logs and covered by handmade shin-was the original pioneer home built of gles. A large new home beside the original was built by the Drapers. 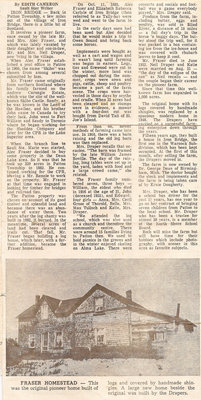