Special To The Star

IRON BRIDGE — The fire that destroyed the old Rod and Gun Hotel early Sunday morning has sparked a host of memories about the Iron Bridge landmark.

It was built in the era when the lumbering industry was in its heyday. Robert Arnill, an early storekeeper and the first postmaster in the village, had erected the main part of the hotel in 1896 to be used as a boarding house. Additions were later made to the structure by his son-in-law, Jack McDonald, who is remembered by many of the older generation today as one of the first operators of the pioneer hotel.

A fact well remembered by local history buffs is that Robert Arnill, who played an important part in community affairs, in 1886 bought the first store in Tally Ho, as the hamlet was first known, from J. B. Dobie, a prominent Thessalon businessman, and at once started a post office. The name Tally Ho was dropped and Iron Bridge — named after the new iron bridge constructed that year — was chosen for posterity.

Business was booming in those early days and later on when Mr. McDonald owned the hotel and its adjoining stables.

The Algoma Advocate of Jan. 8, 1920 reported, "Iron Bridge | is still a busy place. More than 30 teams are stopping here at night. The teams (of horses) are all engaged in taking supplies to the lumber camps in the woods. There are, it is said, over 70 teams now on the road between Dean Lake and the camps north."

Dean Lake was the "jump-ing-off spot" for those travelling by train. Supplies were shipped in for the stores, camps and other places of business. There were camps there too and gangs of men from other points frequently arrived at the station to look for employment in the area. They readily found food and lodging at McDonald's and Grigg's hotels as well as

Among the camps familiar to lumbermen and farmers in the early days were Eddy Brothers, Hope Lumber Co., Bishops, Graves and Bigwood, and McFaddens.

What better place than McDonald's (or The Rod and Gun) to gather and listen to tall tales of "brag loads", happenings and mishaps in the' camps and the river drives from year to year?

Even the tourists have fond memories of the Rod and Gun. On Monday afternoon, Joe Lathrop of Gladwin, Mich., was looking at the still-smouldering ruins. He remarked that he has been coming to the area since 1947 and each year enjoyed his visits at the Rod and Gun. "It was a wonderful place to stop over before going into the bush country to hunt and fish. Probably there were more fish caught and more deer shot around the tables there than there were any place else," he said.

No doubt many a book could be written of the pioneer days and modern days as people and visitors gathered in the Tally-Ho Room — if only the conversations had been recorded.

The present owner, Morris Bobyk bought the hotel in 1980 from Erwin Pascall who had owned it for seven years. The previous owner was Jim Brown, a former reeve of Iron Bridge.

Middle Photo: Side view of the hotel in owner McDonald's time.

Creator
Edith Cameron, Author
Media Type
Text
Image
Item Type
Clippings
Description
A newspaper clipping about the fire that leveled the Rod & Gun Hotel. The historic structure dated back to the original lumber boom times in 1896 when the main part of the hotel was built by Robert Arnill, an early storekeeper and the first postmaster for the village. 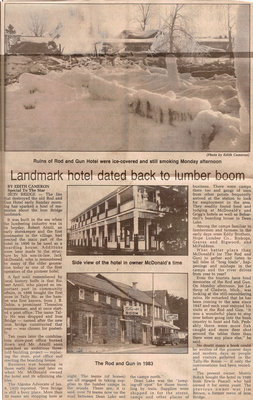