IRON BRIDGE — One hundred years ago, the village of Iron Bridge did not exist.

It was surveyed in 1876 and 1877, one of the crew being Isaac Nicholson, who arrived from Belgrave, Huron County.

In 1879 the Taits and Tullochs arrived from Lambton County and William and John Warnock from Grey. A further influx of settlers arrived the next year from southern Ontario.

In those early pioneer days the nearest post office was Blind River. The mail came only once a month during the winter months.

Roads were non-existent except for a few blazed trails, such as the one from Day Mills to Thessalon. Transportation was by the Mississagi River and the lakes in the area.

Many stories are told of the privations suffered during the early years. The first two years, settlers lost their entire crop because of heavy frosts.

They perserved, however, and soon were growing their own wheat, cutting their grain with cradles, flailing it and taking it to the Harris gristmill at Day Mills to be ground.

The first horses were brought in by the Taits. They arrived by boat at Thessalon, walked through the bush to Mud Lake (now Bright Lake) and then had to swim across the lake as the ice had gone out. Marsh hay along Lake Huron was cut as feed for the animals.

In 1886 Robert Arnill became the first postmaster in the village, which then changed its name from Tally-Ho to Iron Bridge.

Mr. Arnill, who came here in 1884, started a shoemaker shop, old records reveal. The first general store was opened by John Boyd in 1885, then sold to J. B. Dobbie, a well-known Algoma businessman, who resold it to Mr. Arnill.

In those days, combined general stores and post offices flourished in most communities and Mr. Arnill operated his unit for 10 years, until the building burned.

He then rebuilt and also constructed a boarding house, which is still a part of the present Rod and Gun Hotel.

He also operated a sawmill at the foot of Horseshoe Hill, near the village. This was operated by waterpower on what was then known as Arnills Lake.

When the store and post office were run by Robert's son Lome in 1923, one of those employed was Claude Alhusen, a long-term resident who recalls:

"Business was booming in those days as there were lots of camps, such as Hope Lumber, Bishop, and McFaddens and others in operation.

"As well as working in the store, I used to haul supplies from Dean Lake. Everything came in barrels, bags and boxes. All food stuff was in bulk. Soda biscuits were in barrels and candy came in pails. Clothing for the whole family and yard goods' were sold here."

After passing into the hands of William Arnill, the store was sold in 1928 to Alex Tulloch. Mr. Tulloch built a new store on the main street in 1935 and the old one was torn down. This store, still in the Tulloch family, is now a hardware store. .

Creator
Edith Cameron, Author
Media Type
Text
Image
Item Type
Clippings
Description
A newspaper clipping about the beginnings of Iron Bridge and some of the first arrivals. It was surveyed in 1876 and the Taits and Tullochs arrived in 1879. The first horses arrived by boat to Thessalon and then were walked to (Mud) Bright Lake and swam across the lake. 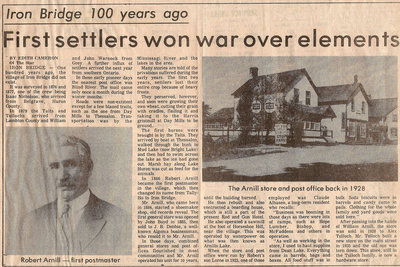