Resting at the Menard Funeral Home, Blind River, on Sunday, January 2 from 1:30 to 3:00 p.m. Service from the Funeral Home at 3:00 p.m. with Rev. Heather Davies officiating. Cremation.

Donations to the Canadian Diabetes Association, Cancer Society or a charity of your choice would be greatly appreciated. Mrs. Reid was a wife, mother, grandmother and best friend to many. 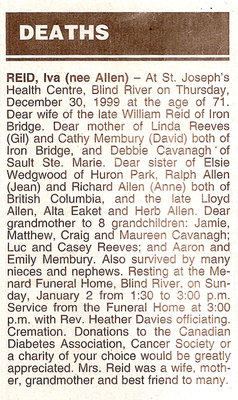