Mystery Question
Do you know who the author of this work?
[Please answer by clicking on the Comments tab]
Media Type
Text
Item Type
Documents
Description
This is a hand written account of the beginnings of the United Church Womens' Association that was formed in 1922. It details their activities and progress through various years.

Notes
The author of this work is unknown.

A History Of Our Women’s Association

Just 12 years ago this month, March 22, 1934 to be exact, a meeting of the ladies of the United Church congregation was announced to be held in the church for the purpose of organizing a Ladies Aid or Women’s Association. Our minister Reverend O. W. Holmes and Mrs. Holmes had been nearly two years stationed at Iron Bridge and felt so sure a women’s organization of this sort would contribute so much towards the welfare of the church and at last were to see their wishes materialize into our “Ladies Aid” as it was called at that time.

At that meeting it was decided to hold our meetings on the third Thursday of every month with a 10cent fee per month and that rule has been followed closely ever since, only changing our meetings to one day earlier.

Our first money making venture was held a month later in the form of a debate and supper held in the Orange Hall. Then in June an ice cream social to raise money to purchase hymn books for the church.

As Mr. and Mrs. Holmes were leaving Iron Bridge that summer Mrs. Gardiner was elected to the presidents chair which office she ably filled for 3 ½ years.

Mr. Curry followed as minister and it was from a suggestion made by him that first summer that our annual W.A. convention came into being, although it was not until two years later that we held our first convention in Sowerby Hall with only Sowerby, Warncliff and Iron Bridge attending. In the fall of 1934 our church had to have a new roof and a bean supper and program was held to help defray expenses. That same fall an urgent call went out for warm clothing, fruits and vegetables to send to the needy in out lying districts in the North country and it was then we made our first warm quilts to help in that relief. Some of the members especially Grandma Nicholson began making talent money by knitting and sewing. We also began an autograph quilt, which when finished was admired b y everyone and called the “Sunburst”, this was sold by auction when finished and was later presented to Reverend and Mrs. Curry.

In 1935 we got our first study book “Trails and tales of the North Land”, and also in the spring of 1935 we had our first pancake supper, which event became a yearly affair until rationing made our menu impossible to fill.

Our money was spent as quickly earned, we purchased our silverware, ice cream freezer, a large cook stove and other dishes and although some may have looked on this as extravagance in spending so much money, I think I’m safe in saying there are none in this community and very few in the communities surrounding Iron Bridge who have not benefited from the privilege of borrowing these same articles free of charge.

Our society has also been active along other lines. We have conducted Sunday services when asked, for several of our ministers in their absence. We have made over garments of clothing and did other sewing and knitting for needy families, helped families whose homes had been destroyed by fire, contributed towards the Sunday School Christmas treats. We have always taken the responsibility of keeping the church swept and dusted and spring cleaned every year.

In 1935 we purchased two Easter lilies for the church on Easter Sunday afterwards sending them to the sick.

In 1936 there was a canvas made for food and clothing to be sent to the dried out areas in the west, and while everyone was called on to help, the W.A. with Mr. Stymist as leader saw to the collecting and packing of anything offered. Perhaps some here remember the ice cream we sold at Iron Bridge on the eve of July 12th, to raise money for material to make seats for the Orange hall and the same fall some put on a corn roast at Rothwell’s beach from which we realized over $10.00.

In the spring of 1938 we purchased the carpet still in use behind the pulpit, also music books for the choir.

We have tried in our own small way, by sending in resolutions and any other protests we felt might help to lessen the sale of intoxicating drink to the people of Iron Bridge, especially to our own young boys and girls who are constantly menaced by the nearness and temptations of the beer parlor in our own little community.

In 1939 War was declared and our whole outlook was changed, the pressing need for our soldiers comforts and the call for Red Cross workers filled our minds above all else, and new ways of raising money to finance these demands were discussed and put into practice. The following are some of the methods used. Each member making talent money, making and selling quilts, quilting quilts, ice cream socials, our pancake suppers, 10cent tea at our regular meetings, the money tree, commission on subscriptions to United Church Observer, sale of articles at the fall fair, sale of Christmas gifts and any other suitable way, many cash donations were thankfully received.

As long as the war lasted we sent parcels to our local boys serving their country and all the members did knitting and sewing for the Red Cross, as well as donating many warm quilts to that worthy organization. Now that the terrible war is ended we began to think again of repairs needed in our own local church and thus it goes on and on, a group of women banded together to lend a helping hand where ever needed and whose motto might well be “Carry On”.

The religious part of our work hasn’t been neglected. There is always a topic usually selected from some part of the bible or of the lines of really great Christians every one accepts their turn and we all enjoy this part of the meeting which usually includes the reading of a fine poem, or some clipping from a paper with a lesson in it for each of us, and too the discussions which usually follow the topics are very interesting and much enjoyed. It has some times been difficult to fill the president’s chair but everyone will agree that all our presidents have been “tops” and there are others just as good to hear from yet.

The following figures are taken from the treasurer’s book and show our aggregate membership for 12 years with an average membership of 18.

Our receipts have amounted to $1,360.00 and needless to say our expensed have been the same.

We have donated to the Church treasury approximately $325.00 to be used toward the ministers salary as well as helping pay a caretaker, also insurance, conference fees. Through the use of a cent a meal box at our meetings we have contributed over $30.00 to the M & M fund. Flowers for the sick and bereaved have cost $47.50. The following donations were sent to Red Cross $10.00, British War Victims fund, $29.00 Russian Relief, $10.00 China Relief, $10.00 Victor Home for girls $13.37, besides we have remembered the aged at the Christmas season, and this has given a great deal of pleasure to Grandma Nicholson as she say “To think they remembered me”.

I am quite sure if Mr. and Mrs. Holmes were here today they would feel all their efforts and work in organizing a Women’s Association at Iron Bridge had been well worthwhile. 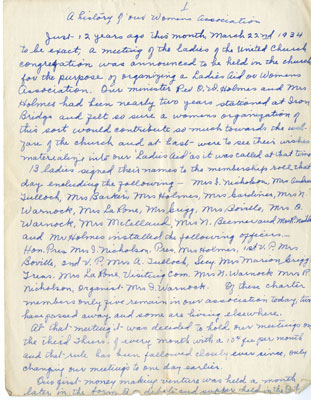