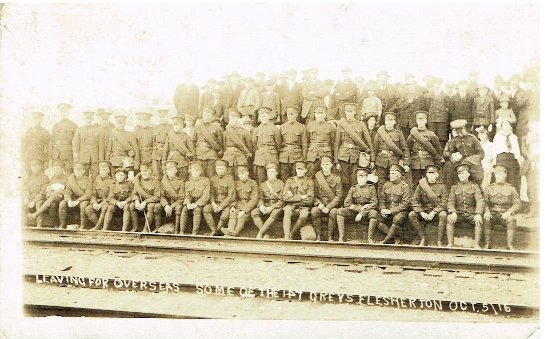 147th Battalion at Camp Borden before they left for Halifax Details
Based in Owen Sound, the 147th Grey Overseas Battalion left Camp Niagara when it became too small to train the growing number of volunteers. The battalion was moved to the brand new Camp Borden in May 1916. The men left the camp on October 5th, 1916 to embark on their journey to Halifax.
Once in the Maritimes, their trip overseas was delayed due to a few cases of diphtheria among the men. A few weeks later the 147th left Halifax on November 13 aboard the RMS Olympic and arrived at Liverpool, England on November 20th. 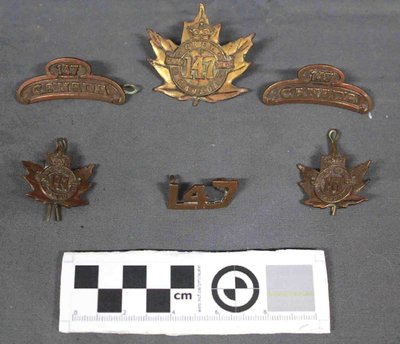 The 147th Battalion Badges Details
Once in England, the 147th Battalion was absorbed into the 8th Reserve Battalion and then had to make the long trip to their home base at Shoreham-by-the-Sea in Sussex. After completing more training, these men were transferred to new regiments. 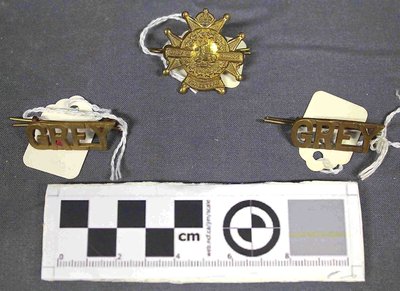 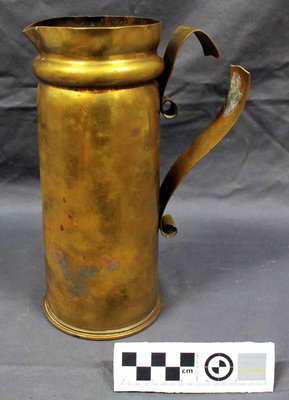 WWI Pitcher Made from Shell Details
This water pitcher was fashioned out of an 84mm shell used from an 18-pounder field gun - most likely made in the field. 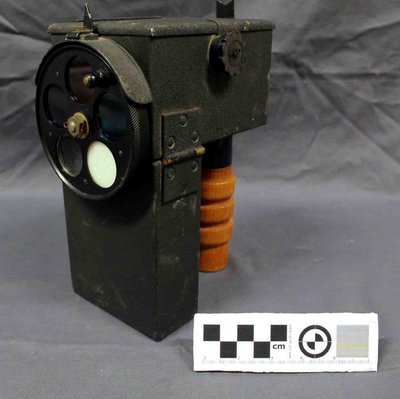 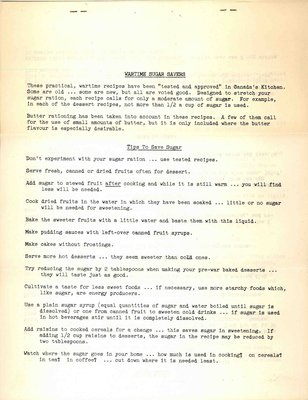 WWII Sugar Rationing Pamphlet Details
This "Wartime Sugar Savers" pamphlet was issued during WWII by Consumer Section-Marketing Service Dominion Department of Agriculture. It contains a list of tips on how to conserve sugar as well as recipes that only use moderate amounts of sugar.
Rationing became common during World War Two. Policies were implemented by the government in order to conserve food which was needed for troops overseas, especially domestic foods such as wheat and apples.
It was during this time that a campaign for nutrition was launched after experts found that 60% of the country had some form of vitamin deficiency. At the heart of the campaign was Canada’s Official Food Rules, which listed the six essential food groups needed for a healthy diet. It's slogan being “Eat right, feel right – Canada needs you strong!”. 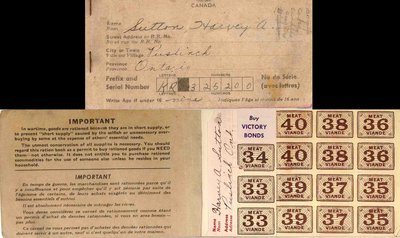 WWII Ration Stamp Book Details
Food shortages meant higher prices. Ration stamps are a form on non-price rationing that would reinforce the control on price and production during the war.
Every household would fill out an application and be mailed a booklet for each family member. These books contained stamps for items such as tea, sugar, meat and butter. A notice written inside the cover says: 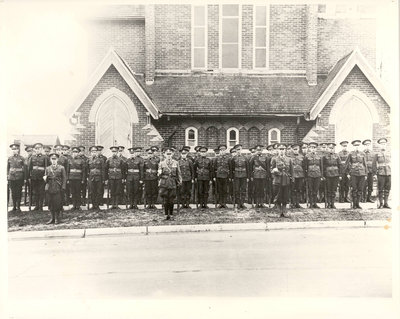 Troops of South Grey Details
This photo was taken outside of the Cedarside Baptist Church in Flesherton. These soldiers were preparing to travel to Toronto for the visit of King George VI in May 1939.
The three officers standing in front are: Lieut. F.J. Thurston, Major W. Turney, and Lieut. S.J. Steeds. 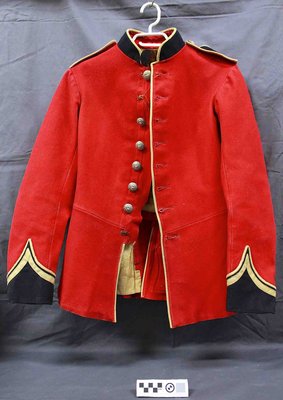 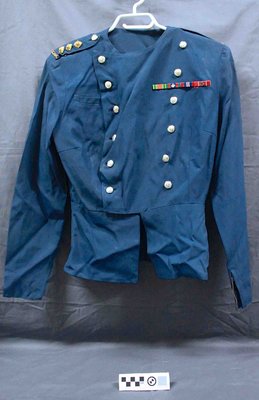 Uniform of the Royal Canadian Army Medical Corps Details
This jacket belonged to May Askew who graduated from Aberdeen Hospital School of Nursing in New Glasgow, Nova Scotia in 1937. During WWII Miss Askew served in Halifax, England, and Belgium; she retired from the army in 1967.
Main Menu → Previous Page
Powered by / Alimenté par