I have received this morning, and read with much interest, your personal letter of the 18th instant.

Your difficulty regarding the plebiscite is one which presents itself to many. You take it that a "yes" vote will strengthen the hands of the government's political opponents and that if more men are required than are offering themselves the remedy would not be found in conscription. Also, that [^handwritten] it cannot with [^end handwritten] truth be said that Canada has not carried the full share of this war both in men and materials, and, you enquire, where are the ships to transport the men? You give additional reasons why conscription for overseas should not be resorted to, even after the government possesses the power.

The point I would like to make is that I and my colleagues are, and will continue to be, not less anxious than you yourself are to avoid resort to conscription for military service overseas. What, perhaps, is not as clear to you as it is to us is the extent to which Canada's war effort, however total it may be in reality, is being prejudiced in the minds of our own people and in the minds of the United Nations, the United States in particular, through appearing not to be a total effort, simply because the power, on the part of the government, to send additional men overseas does not exist.

Please note too that “overseas” has come to mean, in the minds of many, “outside of Canada”. Today we have a situation where, for the defence of Canada on our Pacific Coast, we shall need American troops and planes and ships. Not to be able to send troops and

planes and ships into American territory, as for example Alaska, and islands that lie beyond, is to risk much in the way of additional co-operation by the United States in the defence of our country, as well as their own, and to convey to American citizens generally a wholly erroneous impression, especially where, as at present, they are sending troops and ships and men to the United Kingdom, to Australia, New Zealand and India. This is a very serious ground of misunderstanding to permit to continue for any length of time.

Another matter which is lost to sight is that whatever may happen in this war which is likely to affect adversely not only Canada's interests, but those of Britain, Australia, India, etc., will all be put down to the government being restricted in its method for raising men for military service. It does not matter how untrue the statement may be. It will be made, none the less, and with telling effect by those, whether they be supporters of the government or its opponents, who may have sons or husbands in the war.

By giving the government a free hand all this kind of thing will be completely removed, while I doubt if it will make any difference whatever in the numbers of men who will be sent out of the country. As you know, both in the air, on the sea and on land, up to the present, it has not been possible for the government either to train or equip the numbers that have been offering to enlist voluntarily for service anywhere.

In the event of a debate on the application of conscription at any future time, where I felt I was justified by the facts, [^handwritten] [?] I in no way restricted [^end handwritten] I should feel my own position much stronger than it is at present to advance arguments against the proposal. So long as I am bound by a commitment, the country will believe that I am holding to the view I am expressing, [^handwritten] solely [^end handwritten] on that account, notwithstanding how convincing otherwise the arguments may be. Perhaps I should add that I do not think anyone in the country, other than members of the government itself, and of that number, at [handwritten] least a [end handwritten] minority, are in a position to know the developments which are on the horizon and which may take place at any time, or how they can best be met. In other words the government alone should

be expected to make the momentous decisions in a time of war and should not be restricted by any individual or number of men from being free to exercise that obligation in the light of every possible circumstance.

This letter is being written in great haste and expresses only in part what I feel. I may be that in my broadcast on Friday night you will find a better answer to the points you have raised in your letter. Please believe that I greatly appreciate your writing me as you have, and that your letter will be of the greatest value in helping me to decide on some of the points to which I may make reference on Friday night. 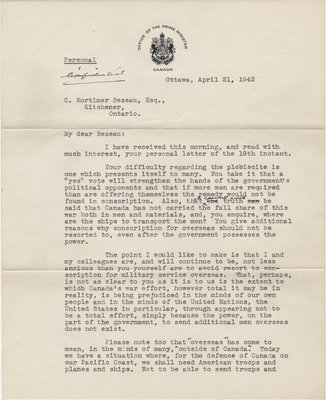 envelope back
Groups of Related Records