Artist description: Corner of King and Frederick Street in Kitchener. This was used for a large watercolour purchased by the Kitchener City Hall. The WW1 War Memorial was moved in front of the City Hall facing King Street.

Woldemar Neufeld died on November 24 from complications of Parkinson's disease, shortly after his 93rd birthday.
Date of Original
1976
Image Dimensions
Image Width: 16.1in
Image Height: 11.8in 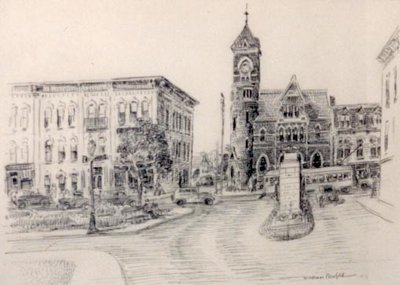