Artist description: The rendering of this watercolour has all the awesome effect that the North Ontario weather can muster. Note the scratching - it served me well when I painted loose watercolours and wanted a thin white line. Northern Ontario.

Woldemar Neufeld died on November 24 from complications of Parkinson's disease, shortly after his 93rd birthday.
Date of Original
1943
Image Dimensions
Image Width: 29.5in
Image Height: 17.3in 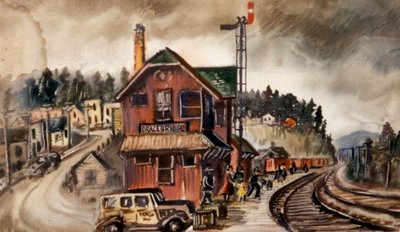