The paper has a watermark and chain lines. The chain lines are 2.6cm apart.

In the Name of the triune God. Amen

These present our Indentures testify that we the Subscribers Inhabitants of the Township of Williamsburg eastern District Province of Upper. Canada have called, and do call by this present

Instrument of Agreement the reverend John G. Wigant late from midland District in the Province aforesaid for our Minister that he may preach unto us the sound and pure Doctrine of the Gospel, likewise to administer the holy Sacraments according to the Ordinance of the Institution thereof, visit if called upon sick and afflicted Persons and explain the Catechism to them, which are to be admitted for the first Time to the Lords Table.

In Recompence for which we the Subscribers do promise annually unto him the full Sum of Twenty six Pounds eleven shillings H.C. Fourty Bshl of Wheat, fourty four Bshl of Oats and deliver sufficient Fire wood at his Door. the Money allways to be paid in half a years Payments and the other Articles to paid in the Course of the Winter; also the free use and Benefit of the Church- Land as far as it is granted to us by Goverment; together with the Parish-House and other Buildings now on it, which are to be put and kept in a sufficient Repair. It is also our free and deliberate Will, that this our Obligation and every particular expressed herein may subsist for all the Life Time of the said revd John G. Wigant, and if he should die during the Time of his Office, one half a years Salary shall be paid to his Widow or Children, so as he received it whilst being in Office. And in Case which God by his Grace may avert, he should be unable to perform his ministerial Office and Function by Reason of old Age and Infirmities, it shall be far from us, to with- draw our helping Hands from him or his, but we promise also in such a sad Case at least the Quarter of the above prom-

promised Salary to him or his Order, till God one Way or other changes his Condition. And concerning other Charges commonly made for the Support of a Minister it is agreed to that he shall be allowed for the Entering in the Church. Book of every Child baptized by him one shilling.

For the publishing and joining together in Matrimony of a Couple if performed in the Church or Parish House one Dollar, but if he is to go abroad he is to be paid for journey separatly.

For a Funeral Sermon one Dollar.

For the Instruction and Preparation of those who for the first Time shall be admitted to the holy Communion it is left to our own Generosity, at least we promise to give him half a Dollar.

We also consent that he may have Liberty to make Use of Four Sundays every year at his own free Disposel For the true Performance and Payment of all these Things we the Elders and Church wardens bind ourselves and our Successors, and have in witness thereof signed our Hands hereunto, at Williambourg this 1st Day of March in the year of our Lord one thousend eight hundred and eight

In witness of us [signed] 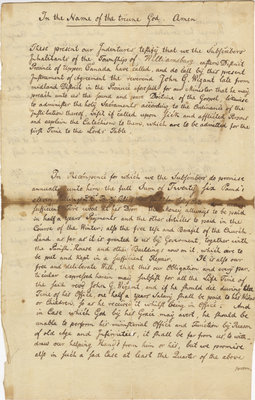