Your kind letter was received some time ago. I have delayed replying because being very busy with pastoral work I have not done a great deal of study for self-improvement. I have however, finished Robins’s Ethics of the Christian Life. I found it very readable and instructive, but was frequently up in arms against it. Mentally I have been comparing him with Moehler and find many points of unexpected resemblance. While he does not use the technical Catholic term, he virtually teaches the domum superadditum, which with him as with the Catholic, was the less sustained by the fall. Like Moehler he also continually

insists on man’s free will even in spiritual things – a will equally free to choose the good and the bad – and in consequence a probation for every man in all essentials similar to that of Adam in paradise. The righteousness which saves is likewise not that which Christ wrought out for us, but the righteousness of Christ in us, or the justitia infusa. And in this respect he is indeed worse than Moehler; for the latter, conscious of the insufficiency of this personal righteousness in this present life, has provided a supplement for it in purgatory, which according to Robins is supererogatory. Like Moehler he also rejects the formal principle that the Holy Scriptures are the only rule of faith and life and makes them only one of a number of means of grace. Throughout his whole work he subordinates them to “the law written in [?] human constitution”. The Holy Scriptures

are regarded as furnishing “rules and directions how to live”, but there is little conception of them as the living word of the living God. They are only an outward thing which serves to disclose and regulate the inward appetence. The Holy Spirit works outside of and independently of them. Hence the invisible Church includes many “who have never heard of the historic Christ”, who yet “are in moral harmony with God”. We do not therefore misionate because the heathen are in danger of being lost, but because of the appetence of self-communication. He virtually admits that this is a lowering of the motive for missionary activity, but claims compensations. I have not given much study to the subject of Ethics, but I should think that “Christian Ethics” should give more lee-way to the authority of God’s Word. For example, as no appetence can be discovered for the Sacraments, he makes them

mere social rites by which the Church renders itself visible. On the other hand he closely approximates the Catholic doctrine that the visible Church is the body of Christ. There are other faults to be found especially a nestonianising tendency in his Christology a virtual denial of the objective character of the judgement and a pelagaining trend from the odium of which the author seeks to escape but which he cannot successfully deny. These criticisms I am making somewhat at random sometime after having read the book. They may not be altogether just but are the impressions that have abided. I have also recently read Storr’s “Preaching Without Notes”. I found it very fine and very suggestive. I desire to say also that since last fall I have preached only one written sermon and made such a poor fist at it that I determined not to try it again, and

have been preaching without any notes ever since. Sometimes “I feel” as Luther says, “like spitting on myself” on account of the poor attempt, but have never altogether failed and sometimes have quite surprised myself by the satisfying manner in which I acquitted myself. If can get my theme and divisions worked out thoroughly I don’t have much trouble. I have been preaching regularly on the Gospels, only occasionally varying by taking the Epistle. Does your new book on the ministry give a fuller treatment than is found in the Ecallsiologia? I have never been fully satisfied on that subject. I was early trained in the Tennessee Synod on the transference Theory so ably advocated by Dr. Loy in his little book on the Ministry, and until I went to the Seminary I believed it was as little to be questioned as the infallibility of the Word of God or the inspiration

of the Scriptures. Since then, however, I have come to see that there is something to be said on the other side and that there is an intermediate view between that and the hierarchical. But early training is strong and I have never felt fully convinced. If your book throws any new light upon it, I want to get it. I am continuing to read, though somewhat slowly for lack of time Zezchwitz and Godet. We are having a very late spring. We have had only one warm day so far and that was on Good Friday. It freezes almost every night and there are frequent small snows. Sunday it froze in the shade all day. With kindest regards and best wishes, I am 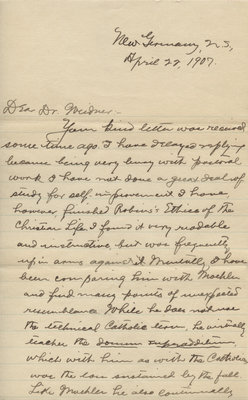