Creators
Carroll Herman Little, Correspondent
Candace Little
, Recipient
Media Type
Text
Item Type
Correspondence
Description
Handwritten letter from Carroll Herman Little to his mother on February 27, 1917. Little describes family life with his wife Bonnie and their children; his work as a Lutheran pastor in Morrisburg, Ontario; the United States' involvement in the war; and the health of the children.
Notes
Carroll Herman Little (1872-1958) was a Lutheran pastor, and a professor and administrator at the Evangelical Lutheran Seminary of Canada (later Waterloo Lutheran Seminary; now Martin Luther University College) in Waterloo, Ontario.

Your very welcome and interesting letter was received a day or two ago. Bonnie is out to-night and the children are all in bed and at present in dream land or at least in the land of nod, so I will embrace this quiet opportunity to answer your kind letter. I will enclose also a letter which Carolus wrote to his Uncle Herbert. It is written so fine that he will probably not be able to make it all out but I will not interpret it for him. Let him exercise his ingenuity. It will do him good and probably sharpen his wits – a thing very necessary for a professor whose duty it is to teach and interpret the uncouth and barbarous Hunsprache. Well, our winter seems to be broken. Yesterday was quite mild and we had rain and constant thaw. To-day was also mild but a little colder. We had some quite heavy snow squalls this afternoon. But the days are growing so bright and the sun is getting so high that we feel that the winter is almost over. Only last Sunday morning, however, the thermometer registered 11 degrees below zero, but the temperature rose rapidly through the day, and on the whole

the day was a delightful one to be out in. I also had very good congregations in both Churches. The coming Sunday I am to be in Ottawa and to hold communion service there. I don’t like going away especially during this Lenten season; but under the circumstances it can’t be helped. The children still have the whooping cough but are improving slightly. I have been interrupted once to look after Marion and the baby since I started this letter. Arthur hardly coughs at all any more. Carolus and Herman show no signs of taking it and are in school every day. Carolus says he will be second on the honor roll this month, which isn’t too bad in view of the time he was out of school. I have just read President Wilson’s address to Congress. It is a virtual request of Congress to abdicate its prerogatives and give the President the right to declare war. The request is enforced by the implied threat that he will do so anyway and that he only asked the Congress for politeness’ sake in as much as he has that authority by implication. To my mind it is only a question of time when the U.S. will be involved in this general wreak

war. It’s a pity too, because it could so easily have kept out of it and might probably have been in a position to exercise a beneficent influence over the terms of peace. The world is in desperately bad state and I doubt if we will ever again see it free from war or as relatively free as it was before this great outbreak. But the world probably needs the chastening, and the Lord God omnipotent who reigneth over the nations knows how to bring good out of evil and has His own wise purpose to accomplish in this general upheaval of human society and conflict among the nations of the earth.

It seems strange to read in your letter about gardening already. We still have three or four feet of snow and I haven’t given the subject any serious thought yet. Your hens are laying well. Ours are not doing much yet, but we get at least one egg every day and that’s about 5 cents worth. To-morrow night I will have my second Lenten Service. But I must bring my rambling remarks to a close. With love, I am 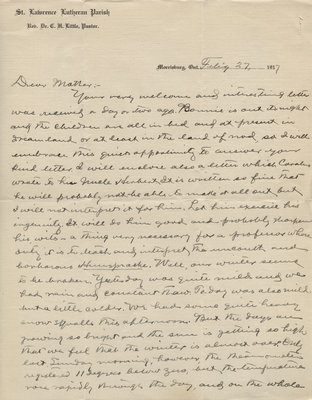