Creators
Carroll Herman Little, Correspondent
Candace Little
, Recipient
Media Type
Text
Item Type
Correspondence
Description
Handwritten letter from Carroll Herman Little to his mother on August 23, 1916. Little describes family life with his wife Bonnie and their children, and his work as a Lutheran pastor in Morrisburg, Ontario. He discusses gardening, the war, and the possibility of conscription in Canada.
Notes
Carroll Herman Little (1872-1958) was a Lutheran pastor, and a professor and administrator at the Evangelical Lutheran Seminary of Canada (later Waterloo Lutheran Seminary; now Martin Luther University College) in Waterloo, Ontario.

As the weather has cooled down sufficiently to admit a little manual labor I will see what can be done for you in an epistolary way. We have just passed through a siege of the hottest weather I have ever experienced in Canada, and I think it has all records broken for fifty years back. It began getting hot the day after I wrote you last week and kept on accumulating heat until Monday when it reached 99° in the shade. The nights were correspondingly hot, and I don’t think up till last night the thermometer fell below 75 or 80. Sunday was a dreadfully hot day and I almost roasted alive in the heavy robes in Church. But last night there was a change and we had a fine shower and thunderstorm this morning since which time it has been more like living. Sunday night Herman and Marion both got sick, one at each end, from eating green apples and I felt pretty well played out by Monday morning. Happily our

toilet and waterworks were in commission again, which saved considerable trouble. Sunday morning Bonnie took the baby over to Church and I baptized him just before the regular service. We had as sponsor Mr. and Mrs. Aden Hunter. Mr. Hunter is a member of the Church Council and has no children of his own. They seemed to take it as quite an honor to be asked to stand sponsors for the pastor’s baby. Little Robert is perfectly healthy, awfully good and growing so fast that you can almost see him grow. Bonnie says it is a real luxury to work and dress him. He sleeps like a log and wakes up only a couple times through the night to be nursed and as soon as he gets a belly full goes back to sleep. He is a tall baby with long arms, fingers and legs, and I think he will make the tallest of the boys. Everybody thinks he is an exceedingly pretty baby. He is fond of the other children and they are very fond of him, and we all think he is the best ever. Our tomatoes

ripened very fast during the hot weather. Monday I gathered half a bushel and yesterday a peck. Bonnie has already put up about ten jars. The cucumbers also have been quite productive and she has made lots of pickles. I think she has some 50 jars of fruit put up, and the grapes and peaches and pears are still to come. We have had several messes of corn and have given some away to neighbours whose corn patches failed. Bonnie thinks I’m a great gardener and is already figuring what we will do when I get too old to preach any more. The schools will start Monday a week, but as that is a holiday, they will not actually open until Tuesday. Carolus and Herman will both go this fall; but as Carolus graded, they will be in different rooms. I see from the papers that a great railway strike is threatened in the U.S. If the President doesn’t succeed in stopping it, I suppose you will hardly get another letter from me soon. But I hope that the strike will be averted. The was still seems to be going

favorably for us and the authorities are pushing recruiting here in Canada. Recently a registration of all males of military age was ordered by Order in Council to be followed up by personal canvass of each fit individual. If this does not succeed the next step will doubtless be conscription, though I doubt if they will try to enforce it on Quebec. I saw one report, though not official, that the “Deutschland” had arrived safely at Bremen; but I don’t know whether there was anything in the report or not. Evidently the “Bremen” has not yet showed up. Yesterday I read the proof of my pamphlet on the Inspiration of the Bible. It will no doubt be out at press by the end of this month. I suppose the College will open about the first of Sept. Hope Herbert will be in shape to take up his work again. What has become of Prof. Hortwig? Well, I must close. With all good wishes, I am 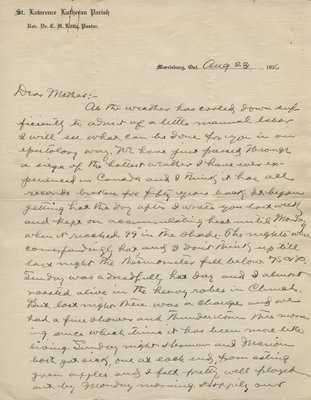