No doubt you will be anxious to hear from me this week. I will therefore not keep you waiting, but will write you a short letter to-night. I am glad to be able to inform you that Carolus is well again and is so hungry that he is almost eating us out of house and home. He was in bed only ten days and the Doctor described his case as an abortive attack of typhoid fever. I kept ice on him constantly day and night and also gave him his tablets which the Dr. prescribed for disinfecting his bowels every three hours and finally conquered the fever altogether. He is quite thin yet, but feels well and is picking up every day. The boys are getting to be quite a help to me. The week before he took sick Carolus mowed the lawn for me, and last week while Carolus was in bed Herman mowed it for me. Carolus was up first on Sunday and went out for the first on Monday. We are much relieved that he didn’t have a long siege of it. It would have been desperate in this hot weather.

We are having it blazing hot at present. Yesterday and to-day were scorchers and there seems no prospect for an immediate let up. The thunder storm last week gave us one cool day but only one and since then it has been hot without intermission. Last night Bonnie and I drove down to Nudell Bush to an Ice Cream Social given by the Ladies Aid of St. John’s. It was a hot night and there was a big crowd on and I don’t think they had any trouble in disposing of their 14 gallons of ice cream. We left about half past ten and got home about 12 o’clock. To-day we had a young man here from our Lutheran congregation at Ottawa, Mr. Arndt Loa. He is a Norwegian, has been in Canada since he was 10 years old and is President of the Canada Luther League. He is a fine young man of about 24 years of age. He came to spend his holiday along the river and will board at a Mr. Casselman’s down near St. John’s. Dr. Bieber has decided to stay at Montreal at least for a year and perhaps longer. This

will relieve us of the Eastern Conference to a considerable extent. Halifax, N.S. is also about to be supplied in the person of the Rev. W. M. Weaver, who has accepted the call there. I just heard this yesterday and it cames with great surprise, as he has been away from Canada scarcely a year yet. He was very anxious for a number of years to get to the States and after he got there he was, I understand, still more anxious to get back. I don’t imagine he fitted in very well at Ambridge, Pa., and I imagine his one sermon a month in German was very trying both to him and to his parishioners. He may get along at Halifax, but I would rather see a man of a stricter type of Lutheranism there. Pastor MacIntosh is expected here on his vacation the last of this month. The war news of late has been quite gratifying and hopes are entertained that the tide has turned at last and that the allies are on the home stretch for victory. I don’t see anything in our papers about the Presidential election campaign. I suppose it

hasn’t got sufficiently hot yet to crowd out the war news, and it looks now as though Mexico and the U.S. were enjoying a love feast. My garden is coming along fine. My tomato stalks are hanging full of tomatoes and I have one almost ripe already. This hot weather has also brought along the corn, cucumbers and beans very rapidly. The trouble with our water works continues. Nothing has been done at all yet to put them in condition, though I am after the trustees every day. It is awfully inconvenient and I am at times quite disgusted with the dilatoriness of those who should look after the matter, but I don’t expect anything to be done before fall, and will be agreeably surprised if they get the thing fixed up before Christmas. But I must close. With love and all good wishes, I am 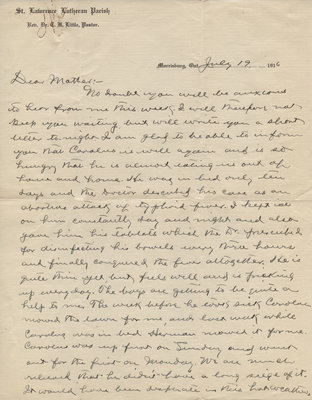