News is somewhat scarce and I am also handicapped by having Arthur and Marion on my hands while Bonnie and Minnie are down town attending a lecture in the Women’s Institute, under which circumstances you must not expect much of a letter. However, I will do the best I can under adverse circumstances. We are having delightful winter weather after quite a severe cold snap. Monday was our coldest day. The thermometer didn’t get above zero all day though I don’t think it was under 10 below at any time. Since then it has been getting steadily milder although it is still fairly cold. We had some snow Saturday night and Sunday morning and squally weather since then, but to-day has been bright and fine all day. Sunday night I preached for Pastor Maurer at Williamsburg. Bonnie drove out with me in the cutter. It was quite cold and there was a heavy wind, but we didn’t mind it. The sleigh roads were very good and we got back home about half past nine. Pastor Maurer got back from Ottawa Monday evening and we had him with us Monday night. At our Council meeting Monday night they voted an increase of $50 on my salary and urged the lower congregation to do the same which I think they will readily do. This will help me out considerably and will almost pay

for my horse hire. The perquisites here amounted last year to about $75 and if they are as much this year I will get in the neighborhood of $1200 and parsonage. Expenses, however, are considerably higher on account of war conditions and the prospects are that they will not be materially lower for a long time. I received my last Christmas present to-day – a humidor of Prince Albert smoking tobacco, 1 lb. from the Rev. Aden B. MacIntosh, Norristown, Pa. He always remembers me. It was rather late for Santa Claus to come, but the box which he sent to his father and sister, Dec. 10, was delayed some how in transit and only reached it destination to-day. But as I had not quite run out of smokes it reached me in good season. I am in hopes now of hanging out till Lent without the necessity of further purchase of the fragrant weed. I am enclosing a mat which Carolus made for you. It is a sample of the fancy work he does in the Kindergarten. He did this one at home to show us how it was done. It was an old spoiled piece which he picked out of the waste paper basket and is not as neat as his regular work. His fancy book is a thing of beauty. Yesterday he came and said “Mother, there is a little girl in school that has all her upstairs teeth out.” He has two of his out and five new teeth already. There is still a good deal of sickness around here, especially La Grippe but we have all escaped it so far. Mrs. Casselman still hangs on though she is now too weak to speak,

and even the family are not allowed in to see her. I was around to see her last night. I don’t see how she can possible last more than a day or two longer. She is perfectly conscious all the time and suffers severely. She has intestinal cancer. The Doctor’s children are still with their grandmother in Toronto. This coming Sunday I am to preach and administer the communion in Montreal. Pastor McCreery will preach for me in the afternoon and evening.

The war situation doesn’t seem to be any better from the allied point of view. The surrender of the Montenegrin forces and the separate peace it involves is quite a set back and a bitter pill to swallow; but there is no evidence of any sentiment to give up yet, but rather to draw the blockade lines more closely about Germany’s throat. Marion and Arthur are pretty well over their colds. They are sweet little children. Every day Marion get on my lap and hugs me and says: “You are a good father” and little Arthur kisses my eyes. He attempts to say almost any word you ask him. But I must close. With love 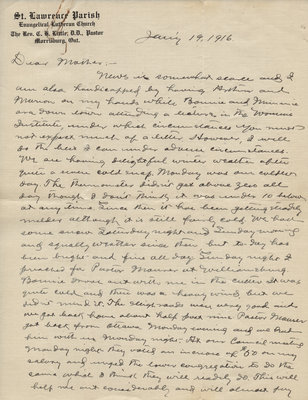