Bonnie received your letter this week and will write you when she is able. She is suffering at present from an attack of the grip, which, however, I think she has pretty well in check now. While I think of it I will say that we received the candy, handkerchiefs etc from Bessie and Bonnie intends to write her as soon as possible. Marion and Arthur are pretty well over their colds, though the latter feels a little bad at present from cutting teeth. Carolus wrote a few strips also some figures, which he asked me to in close in my letter, so that you can see how he is improving in writing. We think he does exceedingly well and he takes great pride in his progress. Herman wants to start to school after his birth day, Feb’y 18, when he becomes eligible; but it is not of much advantage for him to start in the middle of a school year. So we haven’t decided whether we will send him or not. Carolus teaches him sometimes and he can write a few words quite well. We have been having quite mild weather till the last day or two, which have been colder. To-night

we are having a big sleet storm. The wind is easterly and it may turn to rain by morning though at present it is quite cold. So far we have had only two nights that the thermometer was below zero, and 12° below was the bottom record. The winter has been very broken, but we have had sleigh roads ever since the first snow fell. For the last couple weeks the roads and sidewalks have been one glare of ice and the walking has been very slippery. Last Sunday afternoon I had a funeral in the lower Church – that of an old lady who died of the grippe. The funeral was very largely attended. As the burial was several miles off from the Church, I had the committal in the Church and was enabled to get back here in good time for the evening service. We held our congregational annual meeting after service Sunday night. The reports showed the Church, Sunday School, and all the Societies in good financial condition – the best record they say they have ever had. Next Sunday evening I will have to preach for Pastor Maurer who is supplying Ottawa that day and the following Sunday I may have to go to Montreal. Rev. Bieber is expected to take charge of Montreal the first of February for a time at least, I still have 30 or more cigars left from my Christmas boxes. I hope they will last till Rev. MacIntosh’s box shows up.

I wrote to Clarence the other day and expressed my tardy thanks for his present. It is very convenient to be so near to Waddington, otherwise I would not have got through the customs this year. There are a great many sick people in my parish now, most of them with the grippe. There are a number of older people though who are quite seriously ill. Mrs. Casselman is still alive but that is all that can be said. I did not think she would last beyond the holidays, and it is simply wonderful how she holds out. They had to send her grandchildren, Ryerson and Mary to their grandmother in Toronto. They will stay there till the funeral. Well I can’t think of any more news, so I will close. With all good wishes to all, 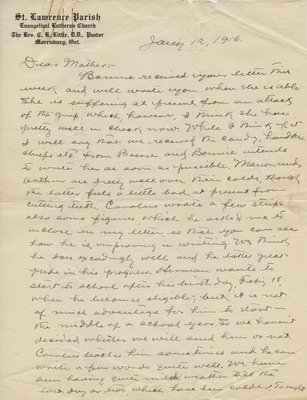