As I didn’t write you last might, I will try to give you a short letter this morning. Time is precious, however, as I haven’t done any work for Sunday yet and must soon get at it. Yesterday Bonnie and Herman and I visited down in the country at Froatburn. We made seven calls and got back home about half past eight last night. We generally take Herman on trips like this. He is such a tease that he makes life miserable for the little ones at home. So we deem it safer to take him along. On the other hand he is the best one to take visiting: for he is a little

bashful and very quiet away from home. Carolus is knocked out of all these trips by going to school. But he likes to go so well that he doesn’t mind it much and is looking forward to going with me during his vacation in the holidays. I was away Monday and made a half dozen or so calls, but that day I went alone. Tuesday I spent down at St. John’s Church, bossing a working party in the cemetery and attending to my catechetical class. So you see the week has been pretty well taken up so far. Last Sunday I held Reformation Service in both Churches and gave my people as good a sermon as I could on that great subject. Quite a number went down from here to St. John’s to hear it a second

time, from which I infer that they didn’t deem it “too bad”. Next Sunday, I am to preach for Pastor Maurer in the evening while he is supplying elsewhere. We have so many vacancies that it interferes with the regularity of the work in our parishes somewhat, though we arrange it so as to miss only one service in our parishes a Sunday. Pastor and Mrs. McCreery and ourselves are invited to spend Friday of next week at a birth day party in one of the families of my parishioners in St. John’s. I wanted to get a chance to go out hunting next week, but there is so much going on that I suppose I will have to forgo it. The weather is pretty cold now – cold enough for snow and it has been cloudy for several days, but nothing has come of it yet. I held my

annual congregational meeting in St. John’s this week. Reports showed the affairs of the congregation in a satisfactory state. I see from the papers that the States that voted Tuesday defeated Woman’s Suffrage overwhelmingly, also that the Republicans were largely victorious. I was glad to see the Suffrage movement given a set back. I never did think much of it and think less of it now than ever. I think I told you I got hats for the boys in Montreal. I couldn’t get any boys’ hats big enough here and got the two largest in Montreal. Carolus’s is No. 7 and Herman’s 6 7/8. One cost $2.00 and the other $1.50. Everything is so expensive that we find it pretty hard to get along on a thousand dollars a year. Well, I must close. With love to all, I am 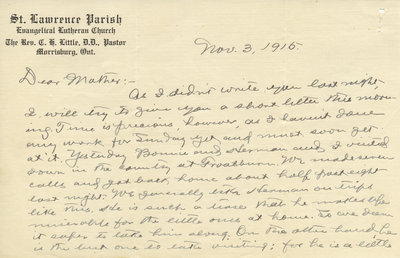