As I did not get around to writing to you last night, I will take a little time this morning to drop you a few lines. We have had wonderfully fine weather for the past week – just cold enough to keep the little snow left from the thaw from melting away and spoiling our sleigh roads. It is the steadiest kind of weather too: every day is just like its predecessor. It would be nice if it would continue this way all winter but February will probably tell a different tale. It is our coldest and stormiest month. I have finished up my calls in the lower congregation. I spent two whole days – Monday and Tuesday – this week at it and made between 15 and 20 calls. There were a number of sick to attend to also, especially among the aged. I have three people who have had strokes, two of them within the last 2 or 3 weeks. All this necessitated a great deal of driving and as I didn’t have time to rest up from Sunday’s exertions, I was almost knocked out when Tuesday evening arrived. But as I made only two sick calls yesterday, I am feeling a little more rested out to-day; but I haven’t done anything on my sermons for Sunday yet and it is getting pretty late in the week already. We are getting a girl this week. I think she will come to-day. We have to pay $10.00 a month and get the washing done by a washer woman, which will run the expenses up to about $14 a month.

But we just had to have one, whatever the expense. Bonnie is very thin and almost on the verge of breaking down and I don’t think she could hang out much longer to do the whole work alone. I had my annual congregational meetings at the two churches last week. Everything seems to be in good running shape, and there seems to be general satisfaction with the new administration. The people continue to bring us in things. I don’t think we will have to buy any vegetables this winter and we haven’t had to buy any butter for about a month. So table expenses are not running very high. I get my salary here regularly every month, which enables me to keep from going into debt very heavily. I owe about $50 on coal and about $40 on furniture. For everything else I have paid cash and can work these off gradually. If I had the $350 they owe me from the Orphans’ Home, I would be in pretty good shape now; but it is hard telling when I will get that, if ever. I heard the other day of Dr. Weidner’s death, which will prove a great loss to our Church. He was certainly one of our ablest men. I was sorry to hear of his departure, but the surprise is that he hung out as long as he did. I received a letter from Bikle this week. He seems to be perfectly happy and quite in love with married life, but says business is somewhat dull at present and is hoping for better times. Hard times seems to have [?] Nova Scotia hard. They are running only

five trains a week on the Middleton railway now and have no trains or mails on Thursday. Times will be very hard all over Canada if the war continues long and I notice the experts on the Allies side claim that it will continue at least two years. My own opinion is that it will take much longer if they persist in pushing it to a final conclusion. In fact I seriously doubt if they will ever be able to conquer Germany. Every day the papers report progress and success for the Allies, but in spite of it all they seem to stay just about where they were last October, and there has been no engagement yet on German soil. Don is still at Halifax. In a letter to Bonnie he says nothing of any prospect of being sent to the front.

We were all invited out to tea Sunday evening at Mr. [?] Casselman’s. Marion showed her appreciation by exclaiming every time she was helped to anything “I like it”. Herman has an idea that he is growing fast. Every day he comes around and says “Father, look how big I am. I am almost as big as father.” Arthur is still in long dresses because we haven’t bought a machine as yet. He is growing fast and is nice and fat. But I must close. With love to all and all good wishes, I am 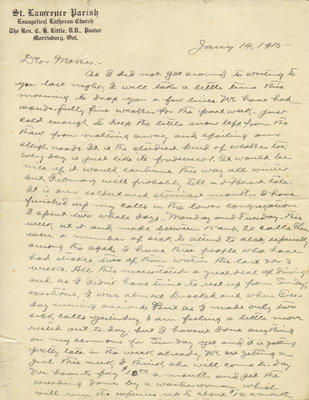