Creators
Carroll Herman Little, Correspondent
Candace Little
, Recipient
Media Type
Text
Item Type
Correspondence
Description
Handwritten letter from Carroll Herman Little to his mother on December 19, 1912. Little describes family life with his wife Bonnie and their children. He discusses and his work as pastor and house father of Bethany Orphans' Home in Nova Scotia. Includes information about a meeting between the pastors of the Evangelical Lutheran Synod of Canada and the Church of England.
Notes
Carroll Herman Little (1872-1958) was a Lutheran pastor, and a professor and administrator at the Evangelical Lutheran Seminary of Canada (later Waterloo Lutheran Seminary; now Martin Luther University College) in Waterloo, Ontario.

I intended to write to you last night, but had just gotten back home from Halifax and was feeling quite tired and also quite sleepy. I went down to Halifax Tuesday leaving Bridgewater at 6:25 A.M. I had thought of going down on the steamer but as it would make me stay away from home so much longer I finally decided to go by rail. At Mahone Bay Pastor Bermon boarded the train and went down with me. Pastor Behrens for some reason or other failed to show up. Our train was late and didn’t get in to Halifax until after 1 o’clock. We spent the afternoon going around the shops and making a few purchases as our means would allow. In the evening the meeting was held in the Church of England Institute and the matter of religious instruction in the public schools was discussed in an informal manner. The discussion showed many men of many minds and resulted as I anticipated in nothing accomplished. Pastor Bermon and I laid down the limits that we would be willing to assent to, viz: Reading of Scripture (St. James’ Version), Recitation of the Lord’s Prayer, and memorizing of Scripture passages – all without comment. Some wanted more and some less, but I told them that if they attempted anything more than this they would get themselves into all kinds of trouble. And I said furthermore that we would not be agreed even to the teaching of the Ten Commandments according to the order on which all the rest were agreed (the Reformed numbering. The upshot of the matter was that another meeting was appointed for the further consideration of the matter to be held in Jan’y.

I don’t think we will attend this meeting as we can hope for nothing from it and there is no use of heaping up expense upon Synod. I would not have had a representation this time on account of the hopelessness of doing anything, but thought it well to show that we were not hostile to the Bible in the public schools and that we were in favour of doing all that was possible. Pastor Bermon and I came back to Mahone Bay by the Kimburn. We had a delightful voyage and a pleasant trip. At one point in the Bay I counted 24 islands in a straight row, apparently about the same distance apart. Our ship made four stops, one at Iron Bound and three at the Tancook Islands. We reached Mahone at 1:30 p.m., having made the passage in eight hours. This was very good, considering the amount of freight they had to handle. From Mahone I came home by train, arriving last night about 6 o’clock.

Next Sunday I am to preach for Pastor Behrens in the Rose Bay parish. Then I will probably be free until New Year’s day when I will preach for Pastor Weaver in Lunenburg. I have been so occupied with things here at the Home that I haven’t had any time yet for preparation of my sermons, but hope I will be able to get through with them in some way.

Yesterday we killed two of our pigs and to-day I sent them over to Lunenburg for sale. I think they will dress 200 lbs. a piece, in which case we will get nearly $40 for them. We have had considerable trouble with the last three children brought into the Home. They ran away about an hour after they came and I had quite a chase to get them back.

Then they decided to adopt the suffragette scheme and starve themselves. I made the little fellow, who is just the age of Carolus, eat, but the other two boys didn’t eat a meal from Saturday morning until Tuesday evening. I made them come in to their meals every time, but they would only look at their plates and wouldn’t eat a mouthful. They ate apples, however, between times. On Tuesday after I had gone to Halifax they ran away again and got as far as Mahone Bay before Mr. Evens caught them and brought them back. But when they got back they were ready enough to eat and today they seem to be all right. They were obedient enough about everything else, but were determined to starve themselves out, so that they would be sent back home. But I think they will be all right now. I had a new suit made last week and wore it for the first time down to Halifax. It cost me $27 and I wouldn’t have gone to the expense, only Bonnie was insistent. I paid the last on the piano a couple of weeks ago. So I have that clear now. Bonnie insists on my going to the General Council meeting next fall, but I tell her that is too long off to talk about or plan for. We have the best little baby that ever was, I think. She is as good as she can be. She only wakens once in the night to be nursed and then doesn’t cry and goes right back to sleep. She coos and smiles a

great deal now. Carolus says, He and Marion are mine and Herman is mother’s. That is the way he divides up the family. He always gives his father the biggest share. Last night Bonnie said to the baby, “God bless her” and Carolus added “and protect her through the night”. He had heard that in the prayers. Herman is also a wonderful little fellow and is as bright as a button. He has a very large head and even a more prominent forehead than Carolus has. He is a great talker too and if I but say I want something he goes and hunts it up for me. Marion is a very pretty baby. Everybody that has seen her says so. Christmas is almost here. I have nothing provided for it yet either for the children of the Home or for our own, but will have to try to get around to it now soon. We will have a tree here I think early Christmas morning. The Church service in Bridgewater will be on Christmas night. As this will probably be the last time I will write to you before Christmas, I wish you a very happy and joyous Christmas-tide. Bonnie and the children send their love and greetings. With much love, I am

Didn’t have any envelopes and forgot this letter when I went down town this a.m 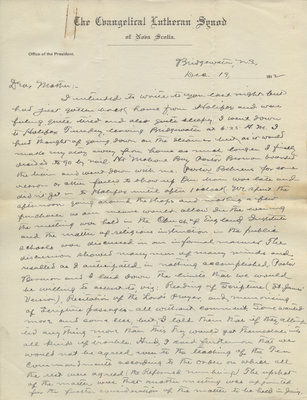