As I am to preach twice in Pleasant River on the coming Sunday, I have two sermons to get up this week and am in consequence a little busier than usual but as it is showering this evening and no prospect of attendance of my catechetical class at Hemford tonight, I thought I would find it a little more convenient to write to you this evening than to wait until tomorrow night. I was over there last evening and stayed till this morning. I am not however at all encouraged over the prospects of candidates for confirmation and feel some times as though it were labour lost and time and exertion spent in vain. It is next to impossible to get the boys and men out. They will spend hours loafing every evening around the store and flock in droves to the station at train time, but they seem to think that they would be disgraced if they should be seen in Church when any sort of religious instruction is going on. They attend very well upon the Sunday service, but it never produces any perceptible effect or leads them to anything approaching a pious life. There are more grown men around there that don’t belong to any church than that do, many of them being heads of families. And the young boys as they grow up, seeing the attitude of their elders, follow their pernicious example. It is quite discouraging, but I will do what I can and give them a chance and leave the result with the Lord. Even among the women and girls who attend the situation is far from satisfactory. I cannot get them to memorise anything or answer any questions, but must proceed altogether by lectures in the hope that they will take something of them in. I am going to push the course through and finish up as soon as I can and will have my communion over there on the 2nd Sunday in June. I am going to stay over Monday at Pleasant River and see what

I can do with some who attended class there when I had it the last time, but were not confirmed. I think it possible that I can have three or four there on the 2nd Sunday. My confirmation here will take place on the 4th Sunday evening. If it is a fine day we will very likely have a large congregation out. It was quite large last Sunday evening. The Church was almost full. The pessimistic predictions of those who wanted the Church located up further in the village have failed to materialise. The congregations have averaged much larger than they did in the old hall. Up till last evening we had some very warm, dry weather for so early in the season. A few days seemed almost as hot as any we had last summer. Last Sunday was especially so, and I was pretty well exhausted when I got through Sunday night. The trip from Hemford after dinner to North River for service in the afternoon is the most trying trip I have and I dread it in hot weather. But the warm air and hot sunshine have brought things out in a hurry. The grass has shot up, violets have opened and leaves came out on the trees and on many of them are already almost full grown. Even apple blossoms have begun to peep forth. The present rain will give everything another boom forward. It has cooled off things nicely too.

Monday was a holiday, it being empire day and reduced rates were given on the railways. So Mr. and Mrs. de Long, Bonnie and I and Meda and her Gunn took advantage of the occasion and went out to Middleton, then drove out into the country to Mr. de Long’s brother-in-law’s, Mr. Palmer’s. We spent a very pleasant day and MR. de Long bought a very fine horse which he brought back with him on the train. He paid $220 for him and is said to be capable of a 2:30 clip.

Herbert wrote me a card the other day saying he would be up with his family on Saturday morning and would stop over till Monday. In that case I will not leave home before Sunday morning as I will not get back in time to see them off Monday morning. But I guess Bonnie will be able to entertain them and see them off while I am away. I suppose you have received the Nova Scotia Lutheran by this time. It gives an account of the work Herbert accomplished during

the short time he was up here. With the $73.00 collected after his report was made up, the whole sum amounted to over $2,500 – a fine record. It is a pity for the sake of the Home that he couldn’t have stayed a few years. I think they will look a long time before they get another man like him. I am somewhat ashamed of the Nova Scotia Lutheran this time owing to the monstrous blunders Weaver who reads the proof let slip in. The worst one was “Godly steward” for “good steward” in the leading editorial, also in the same the noun “virtues” for the verb “witness”. But I can’t correct them. It would keep me busy if I were to undertake it in the paper itself. I am somewhat exercised these days over the appalling financial prospects ahead of me and I really think when I consider the matter soberly, apart from sentiment, that getting married under present circumstances is the most foolish step I ever took in my life. It really reckless and hardly honest, because it will run me so head over heels in debt that I will never get out. I haven’t paid up my board for 2 or 3 months and yet I have only $150 in the bank and 10 or 15 in my pocket. I have no waggon, no furniture, no stove or cooking utensils, no house, no nothing. I find a good waggon will cost me $100.00 and it is not worth while to get away any but a substantial one, and goodness only knows what other things will cost. It will take, I calculate, at least $200.00 to make the trip home and back. I may possible get in $100 between now and September and I may not, I don’t know. But even in that event I would have only $50 to the good and as I have no clothes except what I wear every day, all of that will have to go on clothes and I won’t have one red cent to go on when I get back. I am a candidate for the asylum; nobody but a lunatic would think of getting married under such circumstances. I hardly know what to do. It is not so definitely settled that we can’t postpone it and I don’t think Bonnie would averse to putting it off a year. I would say we would not take so ambitious a tour, but I am sure Bonnie would like to go down and I wouldn’t propose to her not to do so. It is not disgraceful to be poor but it is very inconvenient. If I had it to do over again I would follow my head a little more and my heart a little less. It is like a leap in the dark, one doesn’t know where he will land and I am feeling especially blue over the prospects at present. But I must close. With love to you all, I am 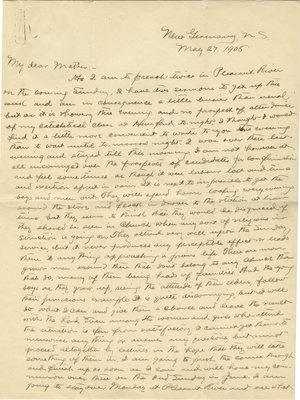