Creators
Carroll Herman Little, Correspondent
Candace Little
, Recipient
Media Type
Text
Item Type
Correspondence
Description
Handwritten letter from Carroll Herman Little to his mother on October 17, 1907. Little describes his life as pastor of the New Germany parish in Nova Scotia. In this letter, Little discusses his trip to the Canadian Dominion Exhibition in Halifax; the death of a man working on the telephone line; and the interior of the new church.
Notes
Carroll Herman Little (1872-1958) was a Lutheran pastor, and a professor and administrator at the Evangelical Lutheran Seminary of Canada (later Waterloo Lutheran Seminary; now Martin Luther University College) in Waterloo, Ontario.

The short days are on hand and the weeks are running rapidly by. It seems only the other day that I wrote you and yet the calendar informs me that it was a full week ago. The leaves are falling fast. Many trees are already quite bare; the brilliant crimson colours have faded to a dark dull red; the yellow to a sullen brown; and all things portend the approach of winter with its cold days and frosty nights. But we are having a little bright weather just now. Three successive days of sunshine are something unusual for the season through which we have been passing and are appreciated by us all. To-day, October 17, father’s birthday has been especially fine. We have had no more perfect day this fall. The frost this morning was exceedingly heavy but the sun was bright and warm and the day turned out super fine. Last Sunday we had another rainy day. It rained almost all day. In the morning I had about a half congregation at Hemford, only eight at Pleasant River in the afternoon and none at the Mines in the evening. It was bad, worse, worst. This made three Sundays in succession that we had rain. There may have been more, but I had occasion to remember these. Last

week was pretty rainy all through. From Sunday a week ago until Tuesday of this week we had only three days altogether free from rain. It put the farmers back considerably with their work. Scarcely any have their potatoes dugs yet and some even have grain still lying out in the fields. This is the case with our farmer at the Orphan’s Home. But he turns out not to be the hustler that we had taken him to be. Herbert has had quite a job keeping him at work. I think we will have to look after his care at our next Board meeting and see if we can’t get better results either with him or with another. On Monday I baptized five children in one household at the Brookfield Mines. Their ages ranged from 10 years down to two. The parents were Catholics, but being removed from Catholic surroundings had neglected the baptism of their children. Lately the mother has been taking considerable interest in our Church and services and requested me to baptize the children. I baptized a baby on the same day for one of my families at Caledonia, which made seven baptisms for the day – not a bad record for one day’s work.

Tuesday I returned home reaching here about supper time in the evening. Tuesday night I had my German class, which is progressing fairly well. Wednesday morning I took the train for Bridgewater for the county exhibition. Herbert met me at the station. At the boat landing we took in pastor Hall and wife who were coming up to the Home to spend the day. Soon after we reached

the Home, the Rev. Weaver and wife unexpectedly arrived. We had a big dinner and a very nice time. It is needless to say Harold gave me a hearty welcome and usurped a lot of my time. Once I took Evangeline and he came pulling at her and saying “put it down, put it down, take me”. The little girl is one of the best little things you ever saw. You would hardly know she was about the house – which is wonderful seeing she is a girl. Bessie is gaining in strength and is looking remarkably well. As they had let the servant girl go to the Exhibition, she did the culinary stint herself that day and did it well. In the afternoon, Herbert, myself and the guests drove over to the Exhibition. This latter itself was not of much consequence, though there were a lot of people on. The most prominent feature was the gambling devices – some of them pure lotteries – of which there were several. The fruit or rather apple exhibit and the display of roots and vegetables were fairly good. What amused Herbert and myself more than anything else was the watermelon and musk melon exhibit. Two watermelons weighing about 10 or 12 lbs. took the first prize and a pair about half as large the second. Two melons about the size of a quart, which were in reality watermelons were marked musk melons and under that nomenclature took first prize, being in a class to themselves. It is probable the judges didn’t know the difference between the two kinds of melons, and as these were the only ones claiming to be musk melons they were awarded the prize as such. But when it came to potatoes, squashes, pumpkins and cabbages, North Carolina couldn’t near

touch them, though Herbert declared the squashes were pumpkins. But this only goes to show that he knew as little of the former as the judges did of musk melons. There was some fine flax on exhibition also. In the woman’s line there were also fine examples mat-rugs, hooked as only Bluenoses can hook them. There were also some fine specimens of live-stock, especially of ox teams. After the Exhibition Herbert persuaded me to return with him and I spent the night coming up home on the train this morning. The photographer from Bridgewater came up with me and took pictures of the church to-day both inside and outside and views of special parts. I put on my robe and was in both the interior and exterior pictures. I will try to send you one of each when I get them. I think they will be particularly good, as the photographer who took them is the best in the county. He took several other views around New Germany for post card effects. The furnace men also came up this morning to install the furnace. I had to look out and get a carpenter to do the cutting and was kept down at the church nearly all day on one purpose or another. The painter is not yet done with all the decorations but I am in hope that he will get through by the fourth Sunday when I will use the Church again. The furnace men expect to finish their work to-morrow. Next Wednesday I am to have a church wedding – the first in my experience – in St. George Church, Pleasant River. Mr. Veniat’s youngest girl will then be married. They will doubtless have the pretty little church decorated in great style for the occasion. I am sorry to lose the young lady though, as she was the life of the

church work there. I hardly see how we can get along without her, but I suppose we will be able to manage some how.

Last Friday a terrible accident occurred here at New Germany. A young man by the name of Hebb, whose father I was acquainted with was working on the telephone line when a part broke precipitating him to the ground breaking his arm and chin and dislocating both jaws besides bruising him internally. He lived about 12 hours after the accident. The same evening a young lady was brought home to Hemford on the train in the last stages of consumption. I knew her and went into the train to see her. She told me she was dying and I administered consolation to her as best I could. I saw her again Sunday. She was still alive but that was about all. At the instance of relatives I told her of her condition and left her resigned. She is quite young and her condition is pitiable. More people die of consumption here than of almost any other combination of diseases.

I have not yet received the Nova Scotia Lutheran, though I have been expecting the first issue to be out for the last week. I instructed pastor Weaver to put your name on the list and send you a copy as soon as it appears.

Pastor Hall has resigned Rose Bay and will leave for the Pacific coast state of Washington in ten days or a ‘fortnight’. This will mean another vacancy to be filled. But I must close for this time. 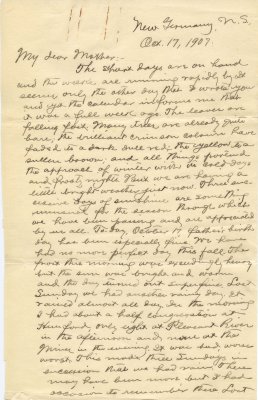