Media Type
Image
Item Type
Photographs
Description
Black and white photograph of six men, five women, and a child standing in front of a building in Fort Erie, Ontario. They are gathered for the first service of Trinity Evangelical Lutheran Church.

John Reble was born in Kropp, Germany on December 14, 1887. He was educated at Kropp Seminary, moved to Canada in 1909. Reble was ordained in Hamilton, Ontario in 1909.

Reble served as pastor of Denbigh-Raglan from 1909 to 1912, Linwood-Hessen from 1912-1925, and St. Paul in Hamilton from 1925-1945. He became the president of the Canadian Synod starting in 1925, and was elected as full-time president in 1945. Reble maintained this position until 1953 when he retired. Following retirement he continued to lead supply services in Walkerton, Arnprior, Kitchener, and Germany.

He married Gertrud Butze on May 26, 1909 at Arnpoir, Ontario. The couple had one daughter, Elsie, and four sons: Kurt, Otto, Eric and John. 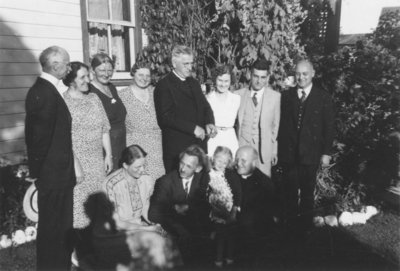