Media Type
Image
Item Type
Photographs
Description
Black and white photograph of a crowd of men, women, and children at the unveiling of the Memorial Cairn at the celebration of the 150th anniversary of St. John's Lutheran Church in Riverside Heights, Ontario. The cairn is in the centre of the photograph.
Notes
St. John’s Evangelical Lutheran Church in Riverside Heights, Ontario is a member of the Eastern Synod of the Evangelical Lutheran Church in Canada. It began in the late 1700s as a congregation of settlers in Williamsburg Township, Upper Canada. In 1789 a church building was erected on the Center Commons Lot in the first Concession of Williamsburg Township. The church was originally named Zion Lutheran Church, but the name was quickly changed to St. George’s Church. The first pastor was Reverend Samuel Schwerdtfeger.

In 1833 the Evangelical Lutheran Church of St. John was consecrated by Rev. Hayunga. The new wooden frame building stood on a lot donated by church member Conrad Frymire. In 1863 a larger, brick church was built on the same lot. In 1956 the St. Lawrence Seaway Project forced the relocation of the Church. On December 7, 1958, the new St. John’s Lutheran Church was completed at Riverside Heights.
Inscriptions
Handwritten, reverse: Cairn at Riverside / 1934.
Date of Original
June 10, 1934
Image Dimensions
Image Width: 10.5cm
Image Height: 6cm 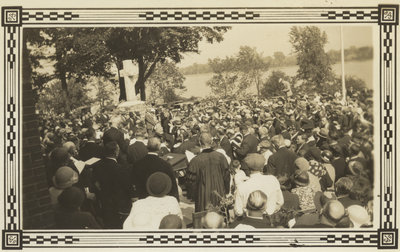