In 1833 the Evangelical Lutheran Church of St. John was consecrated by Rev. Hayunga. The new wooden frame building stood on a lot donated by church member Conrad Frymire. In 1863 a larger, brick church was built on the same lot. In 1956 the St. Lawrence Seaway Project forced the relocation of the Church. On December 7, 1958, the new St. John’s Lutheran Church was completed at Riverside Heights.
Inscriptions
Handwritten, front: "Cairn" service at Riverside, Ont. June 1934. Dr. Knubel replying to address of Hon. A. Bennett, prime minister. 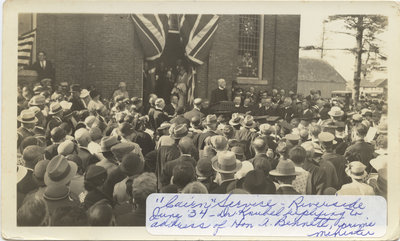