The cairn of stones is surmounted by a stone cross and a bronze plaque. The plaque reads: That Ye Might Tell It To the Generations Following. To commemorate the loyalty, faith, courage and sacrifices of the pioneer Lutheran pastors, the Reverend Samuel Schwerdtfeger and the Reverend Herman Hayunga, and the faithful Christian men and women who established this Evangelical Lutheran Church, a grateful membership of the Evangelical Lutheran Synod of Canada has erected this monument.
Notes
St. John’s Evangelical Lutheran Church in Riverside Heights, Ontario is a member of the Eastern Synod of the Evangelical Lutheran Church in Canada. It began in the late 1700s as a congregation of settlers in Williamsburg Township, Upper Canada. In 1789 a church building was erected on the Center Commons Lot in the first Concession of Williamsburg Township. The church was originally named Zion Lutheran Church, but the name was quickly changed to St. George’s Church. The first pastor was Reverend Samuel Schwerdtfeger. 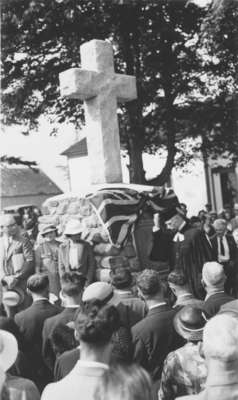