The prize, announced Sept. 13 at Harvard University, was presented by science humour magazine Annals of Improbable Research. The magazine awards 10 prizes annually to celebrate unusual, imaginative and funny research from around the world that “makes people laugh, and then think.”
Notes
Wilfrid Laurier University is a public university in Waterloo, Ontario. Laurier traces its roots to 1911 with the founding of the Evangelical Lutheran Seminary of Canada, the first Lutheran seminary in Canada. 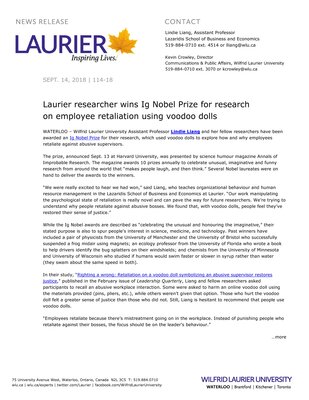