The Wilfrid Laurier University Students’ Union has organized an Orientation Week schedule that highlights the strengths of Laurier’s inclusive community. Orientation Week will focus on helping first-year students balance elements of student life while achieving academic success, enjoying life in the City of Brantford, and understanding the importance of Laurier’s student body in the community.
Notes
Wilfrid Laurier University is a public university in Waterloo, Ontario. Laurier traces its roots to 1911 with the founding of the Evangelical Lutheran Seminary of Canada, the first Lutheran seminary in Canada. 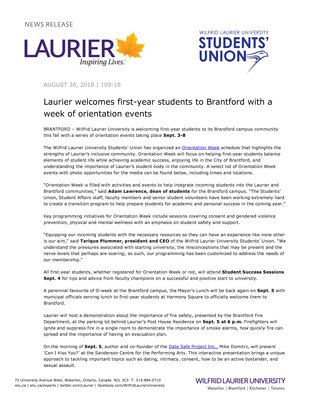