The Laurier Stedman Prize is funded through an endowment and estate gift given to Wilfrid Laurier University by the late Miss Mary Stedman for the purpose of celebrating and promoting arts and culture. Stedman, who passed away in 2014, was a great champion of Laurier’s Brantford campus, and during her lifetime served as an executive member of the Canadian Booksellers Association.
Notes
Wilfrid Laurier University is a public university in Waterloo, Ontario. Laurier traces its roots to 1911 with the founding of the Evangelical Lutheran Seminary of Canada, the first Lutheran seminary in Canada. 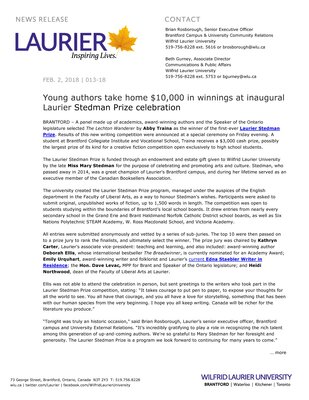