Creator
Wilfrid Laurier University, Author
Media Type
Text
Item Type
Documents
Description
Wilfrid Laurier University news release regarding the free film series “A World of Leading Ladies.” The six-part film series, which is open to the public, offers strong and interesting women in leading roles in films from different genres and different countries. Each film corresponds to one of the programs offered in Laurier’s Department of Languages and Literature; namely, French, German, Spanish, Arabic and Italian.

The series is presented by Laurier’s Department of English and Film Studies, in partnership with the WLU Film Society and with funding from the dean of Arts. Each screening includes an informative introduction by a Laurier faculty member.
Notes
Wilfrid Laurier University is a public university in Waterloo, Ontario. Laurier traces its roots to 1911 with the founding of the Evangelical Lutheran Seminary of Canada, the first Lutheran seminary in Canada. 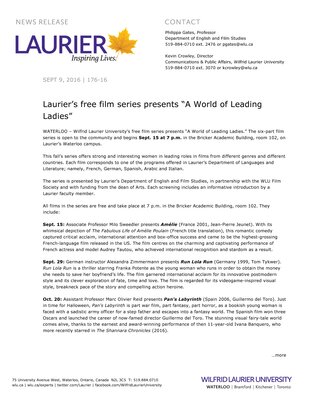