Creator
Wilfrid Laurier University, Author
Media Type
Text
Item Type
Documents
Description
Wilfrid Laurier University news release announcing the Sun Life Financial Centre for Physically Active Communities is offering a free screening of Swim Team. The film is a critically acclaimed documentary about a swim team made up of youth on the autism spectrum and the coach who helps them succeed. The screening will be followed by a panel discussion by community experts.

Includes information about the event and speakers.
Notes
Wilfrid Laurier University is a public university in Waterloo, Ontario. Laurier traces its roots to 1911 with the founding of the Evangelical Lutheran Seminary of Canada, the first Lutheran seminary in Canada. 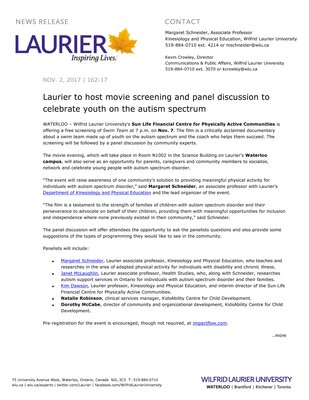